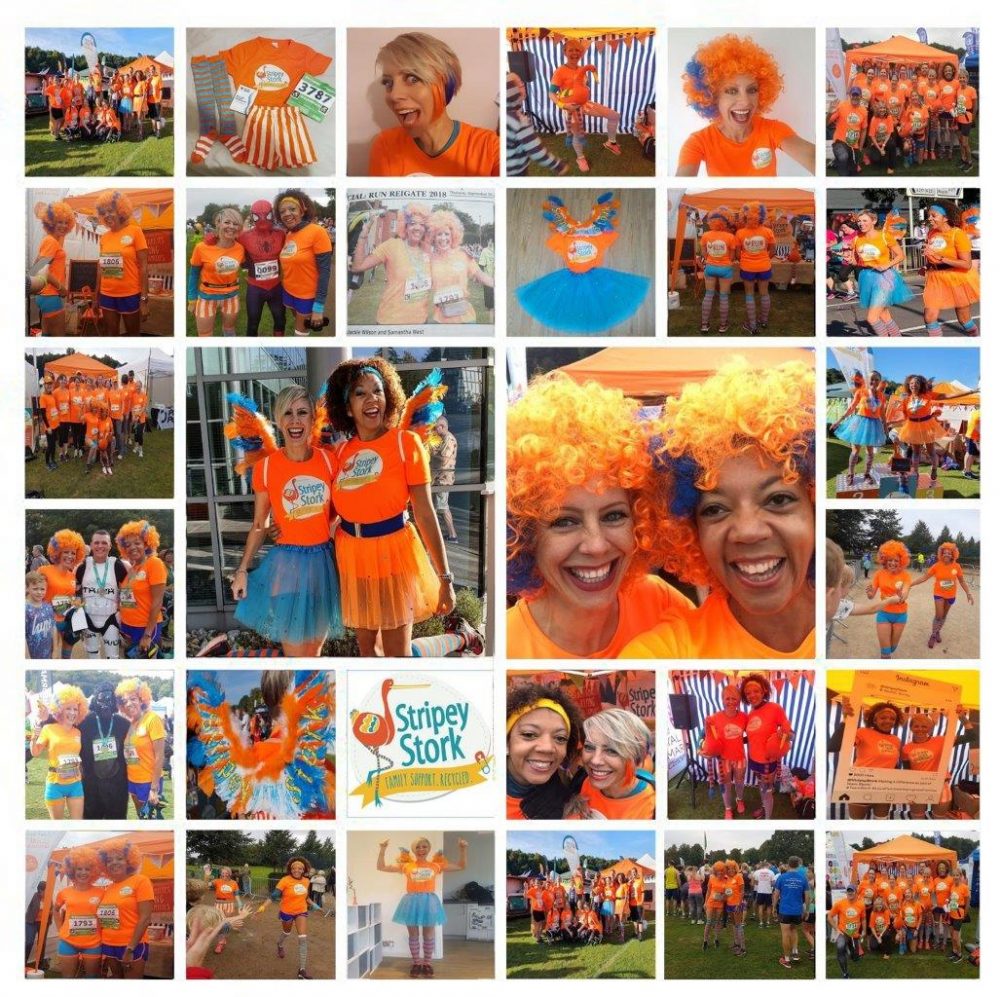 Although we’re missing the buzz of Run Reigate this year – as well as being a great fundraiser for us, it’s also a really fun day which we get to share with our supporters and community alike – we’ve still rallied the Team Stork troops and have lots of adults and children running virtually for us.

Including our orange and blue fairies, Sam and Jackie, because Run Reigate just wouldn’t be the same without them. Each year we look forward to their costume reveal and this year the show must go on. They can always be seen a mile off in their on-brand stripey outfits, crazy hair and accessories to match. This week we caught up with them both to find out what inspires them to fly the Stripey Stork flag, why they love Run Reigate and what they have in store for us this year’s virtual event.

1. When did you first take part in Run Reigate?

Sam: Our first run with Run Reigate on behalf of Stripey Stork was September 2017, so this is our fourth year running for Stripey!

Jackie: …Wow, how time flies and the costumes just get more and more bonkers!!

2. What do you enjoy most about Run Reigate?

Sam: I love the atmosphere of Run Reigate, the community spirit and encouragement from people who don’t even know you. How all the charities work so hard to raise money and awareness. Everybody is doing what they can do – the organisers, the runners, the supportive crowds, all wanting to achieve something great. It’s a really emotional, fun and special day.

Jackie: The atmosphere around Reigate is amazing, especially the reactions we get from our costumes whilst we represent the fabulous Stripey Stork charity.

3. What is your favourite Run Reigate memory?

Sam: Running down a country lane alongside Kelly Holmes, with her shouting ‘”Go Stripey Stork girls, I love you!”.

Jackie: High-fiving one of my heroes Dame Kelly Holmes in 2017, as she flew past us on the 10km course. It’s a fantastic memory I will never forget.

4. Which costume was your favourite?

Sam: Both my favourite and absolute worst (for the sheer hell of the heat) were the orange and blue striped 70’s themed costumes complete with afros in 2018. We certainly deserved our donations that year!

Jackie: The wings of 2019, they were amazing! I am never running in a wig again like we did in 2018, we nearly expired that year

5. Why do you support Stripey Stork?

Sam: When I was first introduced to Stripey Stork, I was really taken aback by all the incredible hard work Nicola and her team do to help improve the quality of people’s lives. Everyone has troubles and griefs of some sort in life, but charity starts with those who downplay their own problems, in order to extend kindness and compassion to help others. I have never come across a charity which does this in quite the same way as Stripey Stork. Surrey is one of the wealthiest boroughs in the country but there are areas where poverty is really high. To be able to reuse all of the perfectly good clothes, baby items and toys in such a positive way, helps foster a happier and healthier community all round. I have nothing but admiration for Stripey Stork. I may not be able to help as much as I would like, but I know our crazy outfit runs have definitely been noticed and helped spread awareness about Stripey Stork.

Jackie: I echo what Sam has said, it’s just a fabulous local charity, doing amazing things for people down on their luck.

6. What do you have planned for this year’s virtual Run Reigate?

Sam: This year myself and Jackie are running a 10km loop at Reigate Hill on the 26th September. My rescue dog Archie will be joining us and doing his very first charity run with us; he’s been training lots and is ready to go. Having had a hard start in life, he has done incredibly well, he couldn’t even be on a lead a month ago. He is excited to be doing his first run for Stripey and hopefully seeing a few squirrels along the way for an extra power boost. I might even have a costume for him too, so look out for the photos.

About 10am, before our run, we’ll be parading down Reigate High Street and through Priory Park shaking a collection bucket. We’d love for as many people to cheer us on and show their support for such a great cause.

We’d like to thank Sam and Jackie for the flare they bring to Run Reigate each year, for all their fundraising efforts and for being absolutely brilliant sports, all in the name of Stripey Stork. Watch this space for next year’s outfits, as they seem to be getting bolder and crazier each year! These superstars are Team Stork through and through.

If you’d like sponsor Sam and Jackie for their 10km, you can do so here. Or if you’d like to virtual Run Reigate for Team Stork – half marathon, 10km or 5km – it’s not too late, see link for more details.