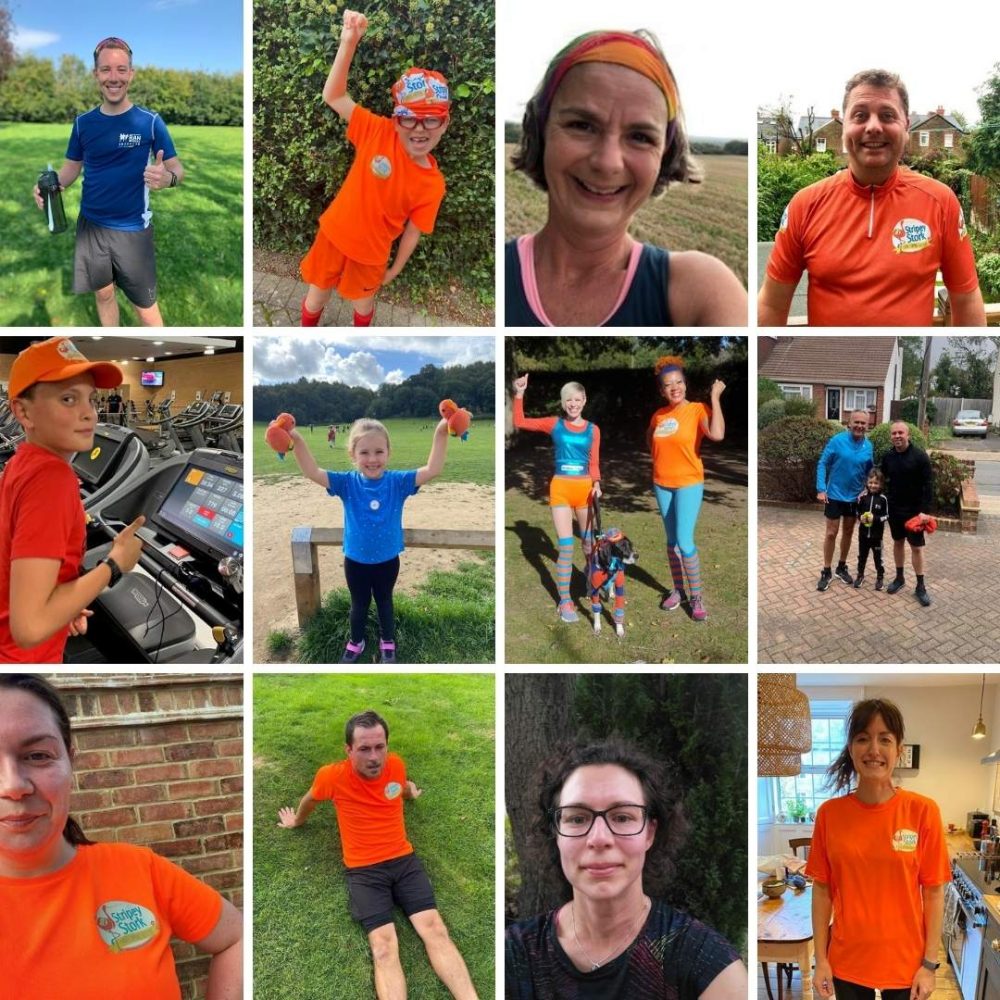 *We’re still updating this fundraising total with last minute sponsorship. This figure, and those amounts mentioned throughout the blog, do not include gift aid.

We can proudly say that whether #TeamStork are running together or virtually, they still smash it! When the pandemic escalated and Run Reigate was cancelled, our hearts sank a little bit. As well as being the biggest fundraiser in the Stripey Stork calendar, it’s also a great event which brings the wider community together and is a great opportunity to raise awareness about what we do. We were the headline charity partner this year, so plans were already underway to ‘go big’ but alas, it wasn’t meant to be.

Just like us, our friends at Run Reigate will not be defeated. They came up with a Covid-safe alternative which would still have the running community pounding our local streets and parks. Giving people the motivation they needed to get out and stay fit, whilst still earning this year’s Run Reigate medal and t-shirt for their collection. Virtual Reigate 2020 was launched, and the race was on!

Run Reigate wouldn’t be the same without our orange army of runners and they didn’t disappoint. As well as signing up for Run Reigate, all race entrants were also invited to donate or fundraise a minimum of £20.20 for Stripey Stork. In exchange for running their chosen distance in their own time this September, they’d receive a branded bandana (doubling as a headband and face covering). Motivated by knowing the real difference they’d be making by supporting their local baby bank. 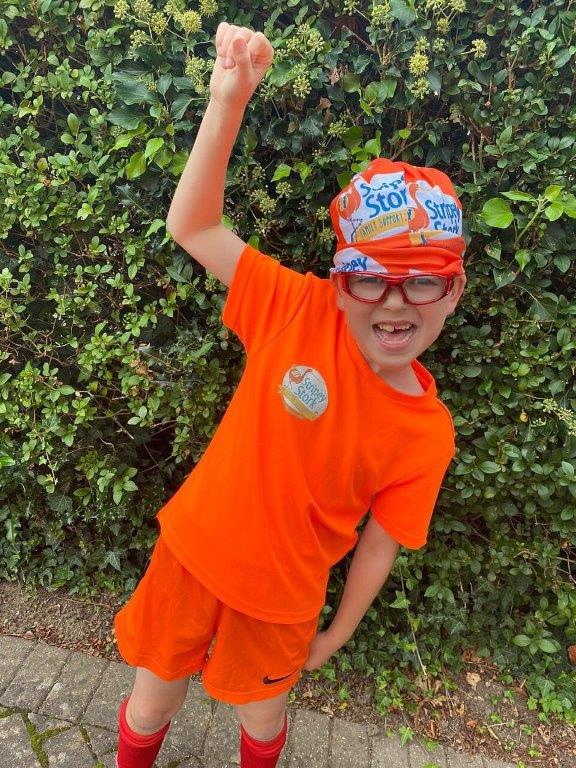 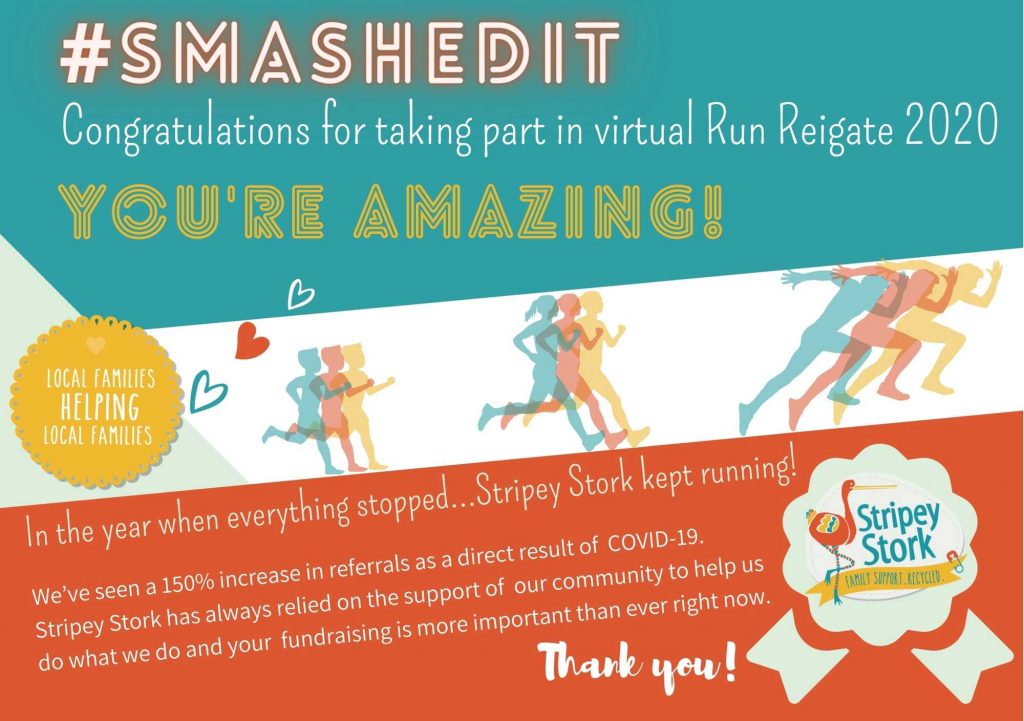 Some chose to run independently of Run Reigate and do their own virtual challenge. Whatever their goal, we were pleased to have 58 #TeamStork competitors this September.

Children had the option of running the usual one mile or, if they were really up for a challenge, a cumulative half marathon over the course of the month. The usual kid’s race is always such a popular event and, for many age groups, a sell-out. Turns out the virtual race is too, as Run Reigate had to order more medals and t-shirts as the first wave of allocated places sold out in the second week. 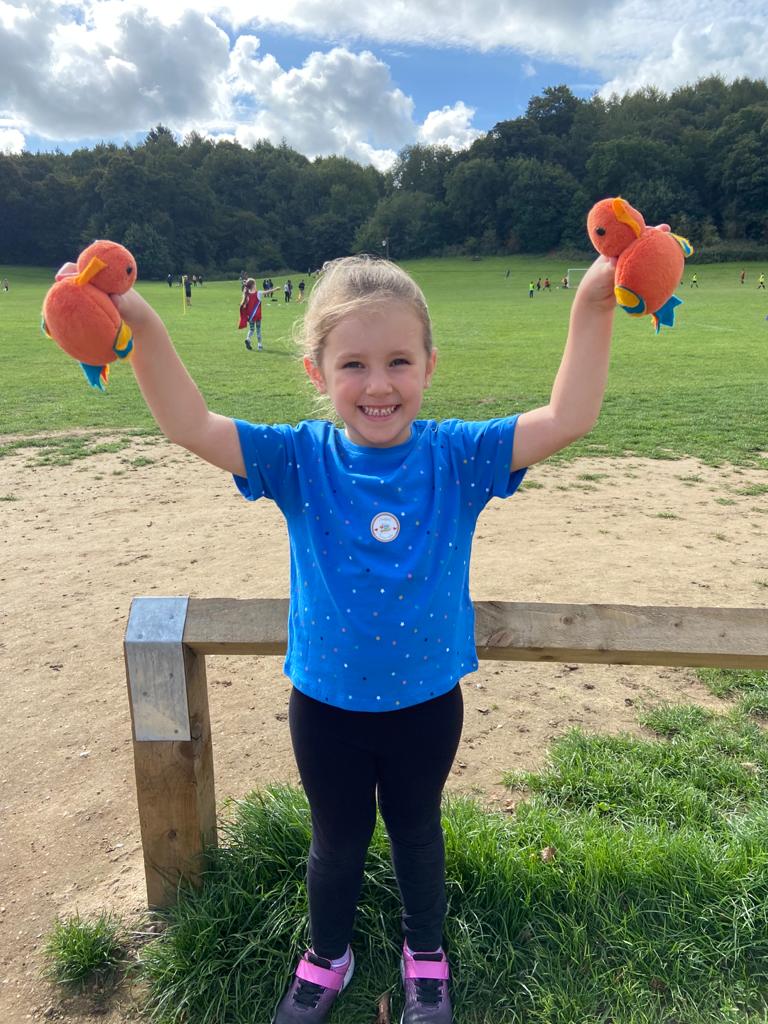 We are so proud of our young runners who did a fantastic job in crossing that virtual finish line with the stork beneath their wing. This was literally the case with Saoirse; here she is running with her much-adored Stripey chick mascots.

Please give an incredibly special cheer to Dylan, age 11, whose aim was to run a half marathon on the treadmill throughout September. Dylan was so motivated when he saw the sponsorship coming in that he decided to keep running – our very own Forrest Gump – and a full marathon became the new goal! As he hoped, this brought in another influx of donations from family and friends. What a personal accomplishment and we are pleased to say that he achieved his goal whilst raising an amazing £676.20! 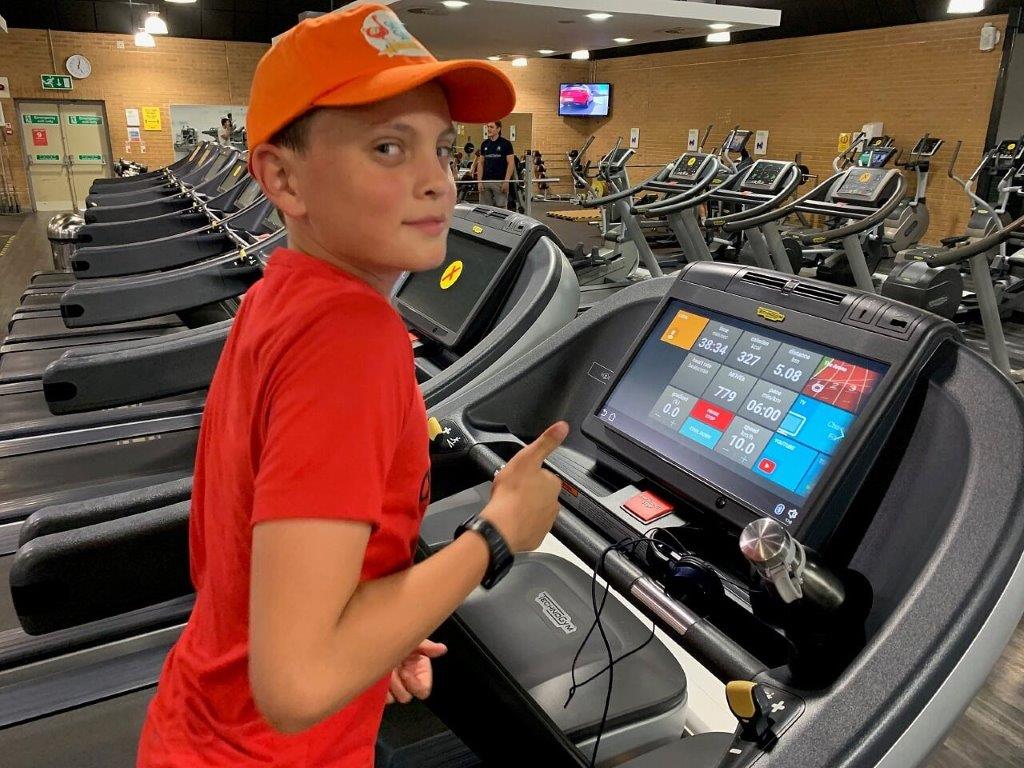 We had a bunch of wonderful supporters running the 5k, 10k and half marathon distances. Some in one go, others cumulatively, one who couldn’t run but still donated (thanks Paul C!), but all for Stripey Stork. We’ve loved seeing all the photos of our unstoppable stork runners. It really demonstrates how the community has ‘our back’, at a time when this support is needed more than ever. 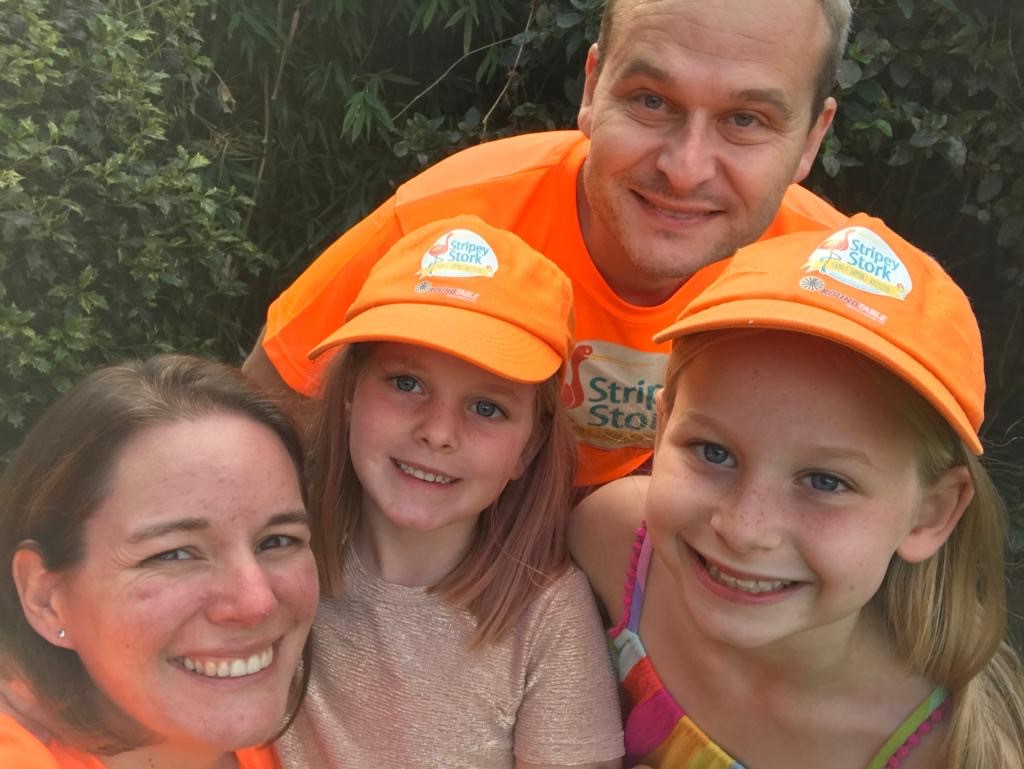 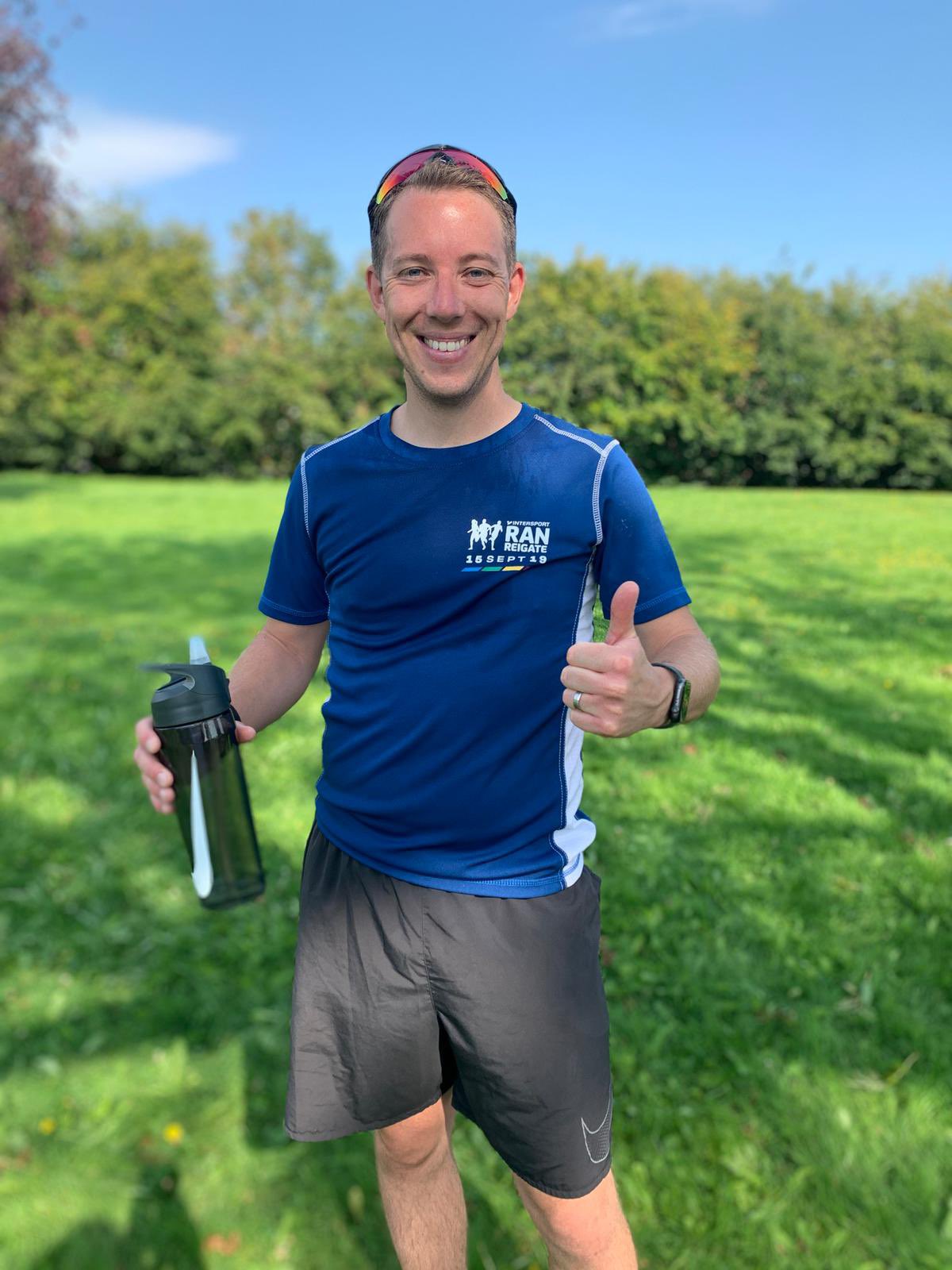 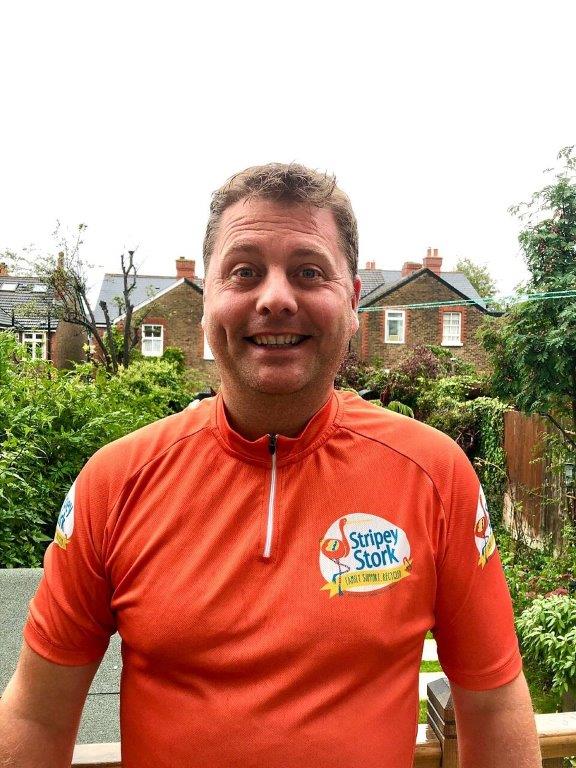 There were those who claimed not to be natural runners, absolutely owning it! Like Simon S (right) who decided to go for the half marathon after never running more than a few miles in his life, preferring to stick to the rugby pitch. Turns out he is a natural runner after all and also nailed his fundraising by reaching over £650.

We also had families unite in their efforts, like the Dawes family (below) who came together virtually and collectively raised over £700.

The wonderful family behind Surrey-based business Celtic Contractors never let us down. They turned it into a family affair, with no one left behind.

Even though there was no specific category for our canine friends, rescue dog Archie had a very important role to play with him being the new member of Sam’s family. Every year Sam and Jackie turn heads with their elaborate Stripey Stork running costumes – see our recent blog. And this year there were three! This colourful trio paraded through Reigate one busy Saturday morning before they embarked on their 10k run. They did a fantastic job of raising awareness and funds for Stripey Stork, whilst bringing a smile to all who had the pleasure of seeing them. We are so grateful to have them as charity champions and for the brilliant £890 they’ve raised. A superb result! 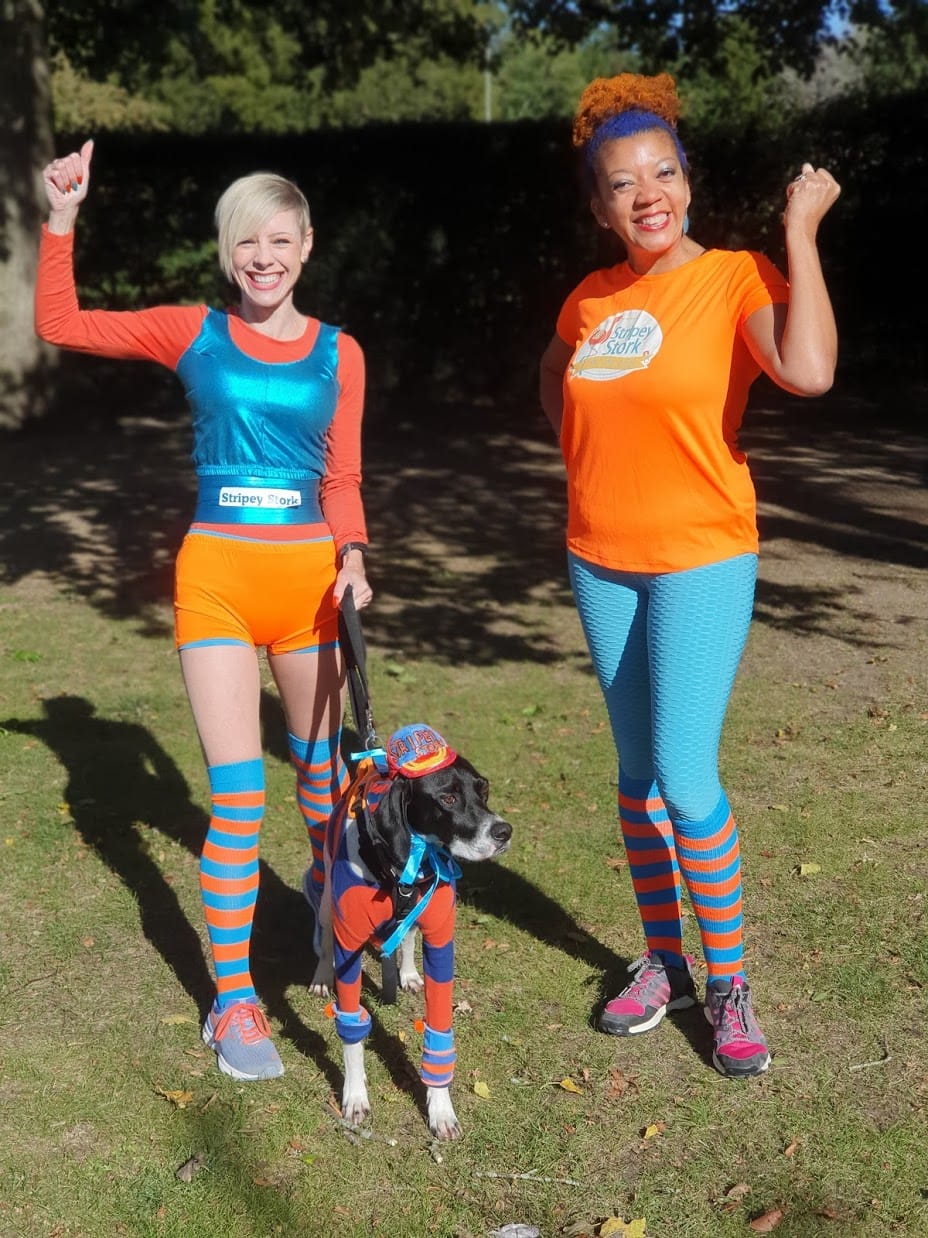 First Community Health & Care are one of our main referral partners, so we were delighted to hear that they were organising a team of their own. They’ve since raised over £650 in sponsorship of which we are so grateful.

Thanks for working especially hard for your supported families during the pandemic, but still finding the time to run on #TeamStork: Adrian, Joanne, Jon, Juliette, Katie, Naomi, Oonagh, Sara, Sarah, Sue and Val.

Last but never least is the fabulous team at Run Reigate, in particular Dave, Karen and Lisa who delivered a virtual event they should be proud of. Those 2020 medals will be hanging proud, event t-shirts sported around town and race participation offers enjoyed – all thanks to their hard work and dedication.

We are also very appreciative of the £265 contribution (included in our fundraising total above), from the £1 which was donated from every kid’s entry.

An amazing community effort, we really did come together as ONE.

Feeling inspired? #EarnYourStripes in our all year round virtual challenge.