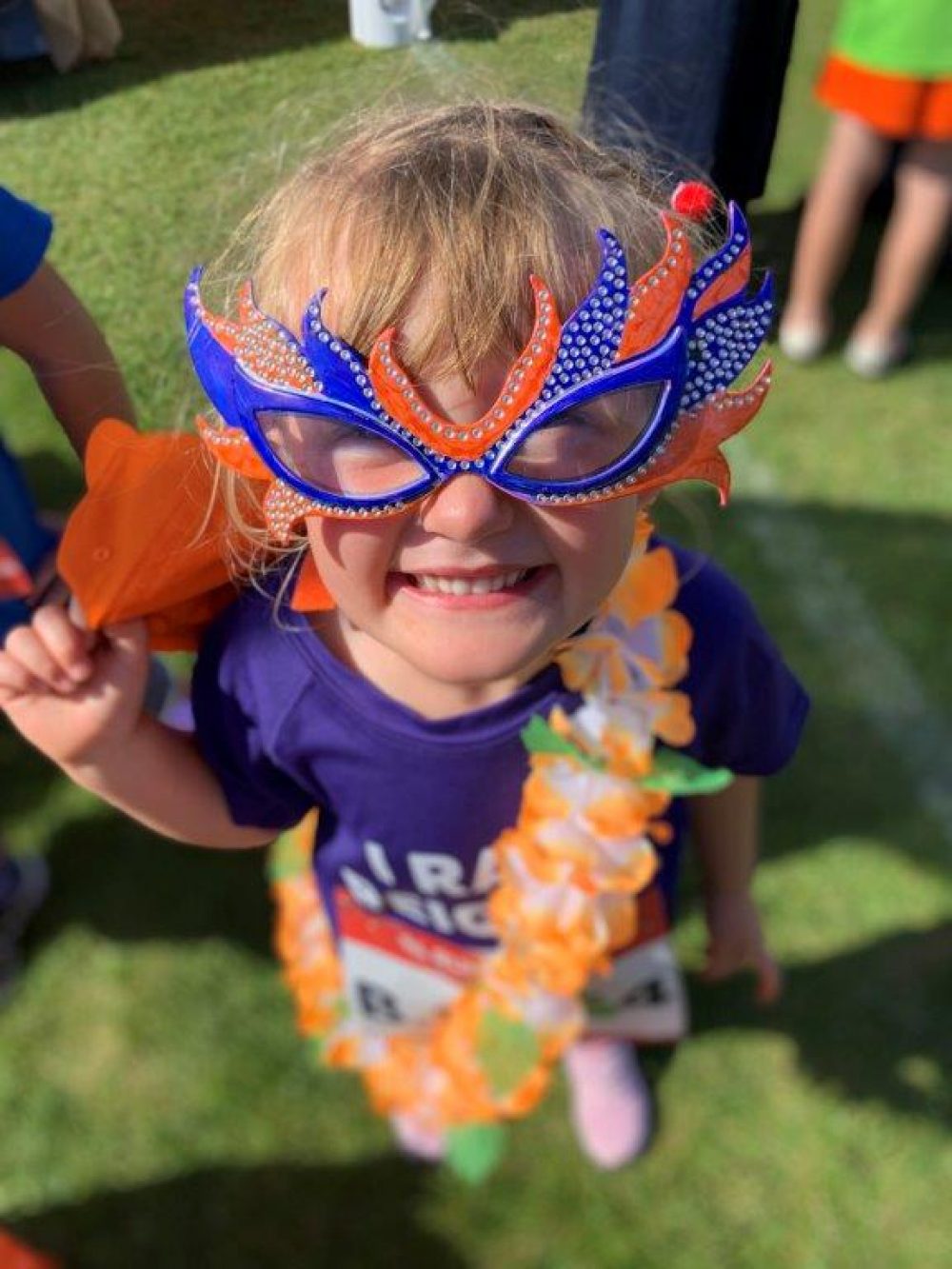 On Sunday 15 September, Priory Park was the scene for Run Reigate. Now in its sixth year, it was bigger and better than ever. It was also that little bit more ‘orange’ – as our runners, volunteers and supporters came out in full force, showing everyone Team Stork at its best!

We’ll be adjusting the counter in the coming days and weeks as more money comes in, but what an amazing effort. We are so pleased with what has been achieved at one of our key fundraising events of the year. As well as the obvious benefit of raising much needed funds, it also gives us the opportunity to raise our profile in the local community.

Running their stork socks off

We are so grateful to the 77 runners (46 adults and 31 kids) who ran for Stripey Stork. It was a hot day for running but they had one goal in mind, to make it to the finishing line and deliver on their promise to their sponsors and us. We’re pleased to say that every single one of them did it, so a massive high five from Stripey! 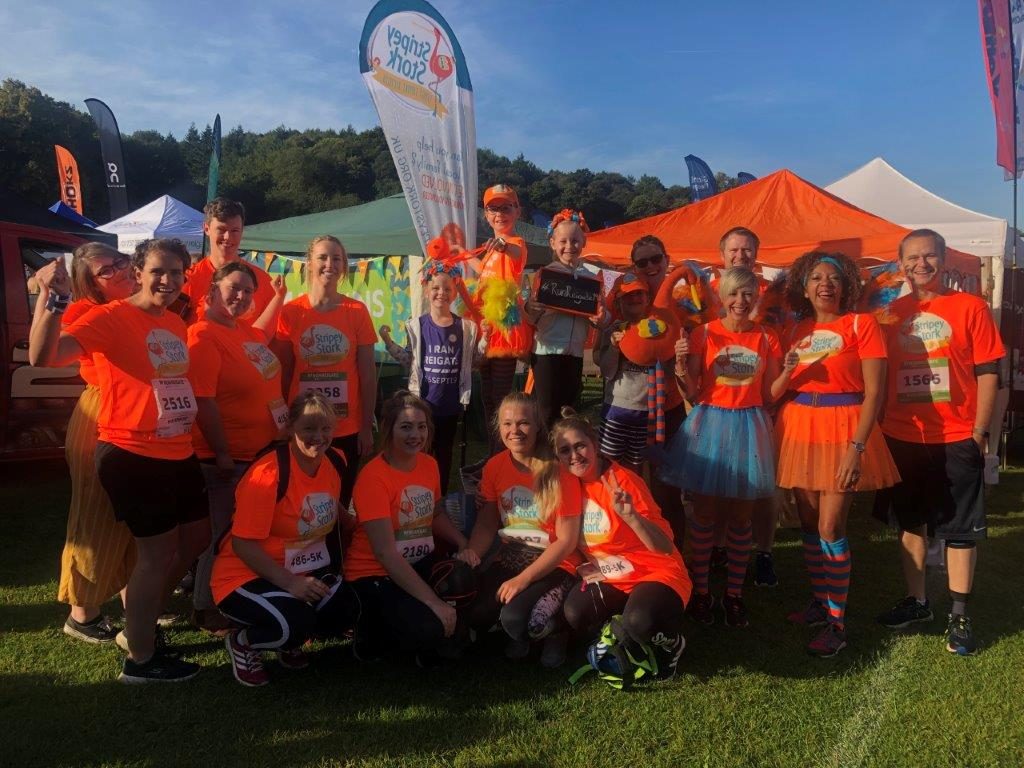 A splash of orange – everywhere

Our aim is always to turn Priory Park a little bit orange and this year was no exception.

Sam and Jackie outshone themselves yet again (not an easy accomplishment after their previous year’s outfits). Every year we look forward to their creations, and every year they deliver. They were the brightest, feather-iest duo there, and we are so lucky to have them on our team. 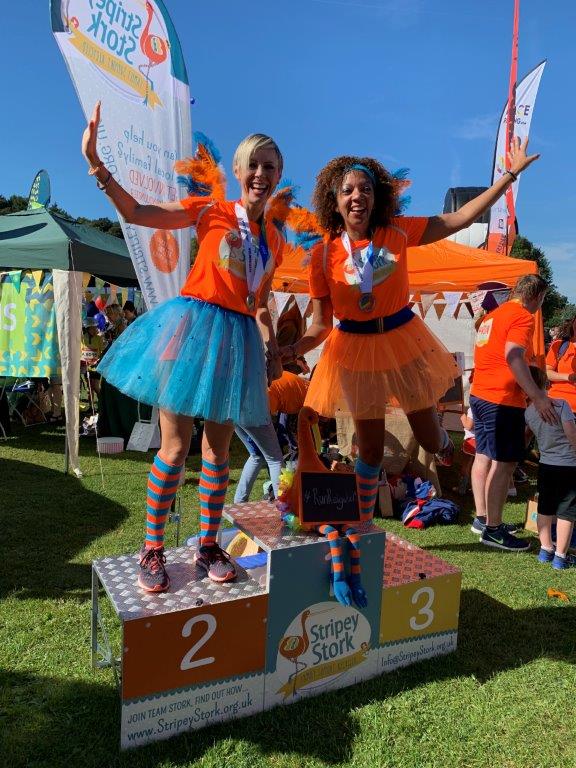 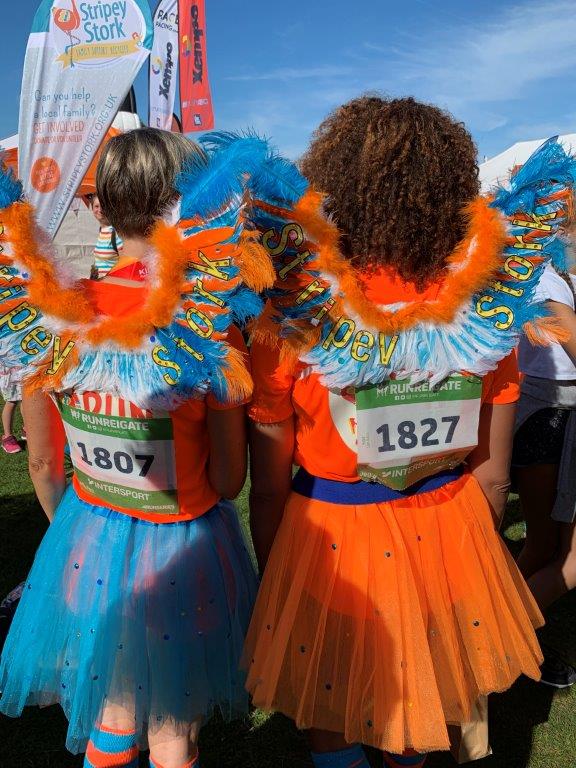 Run Reigate wouldn’t be the same if Caitlyn, our little stork, hadn’t flown in for the day and fluffed her feathers around the park. She’s one of our extraordinary young ambassadors and was the envy of many in her costume. 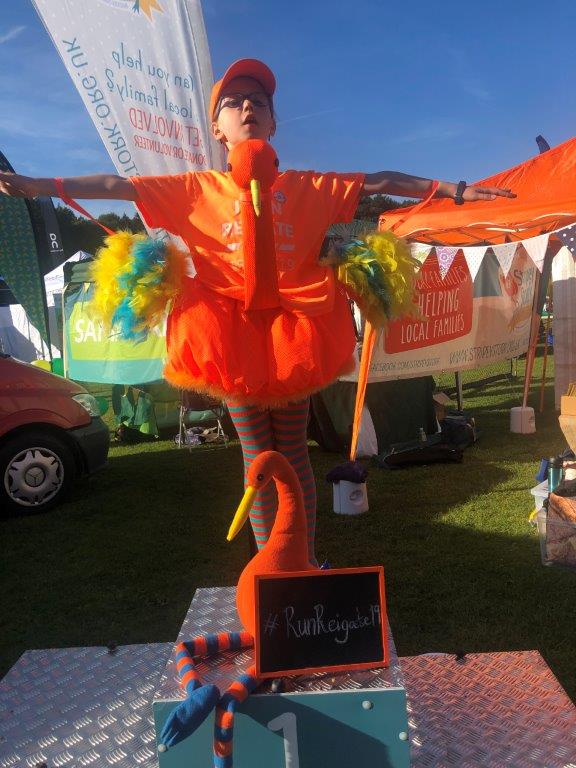 We were honoured that the Mayor of Reigate & Banstead, Cllr Keith Foreman, was running the half marathon for his chosen charities; Stripey Stork and Loveworks. He popped by to say hello and for a quick warm-up before his race began. 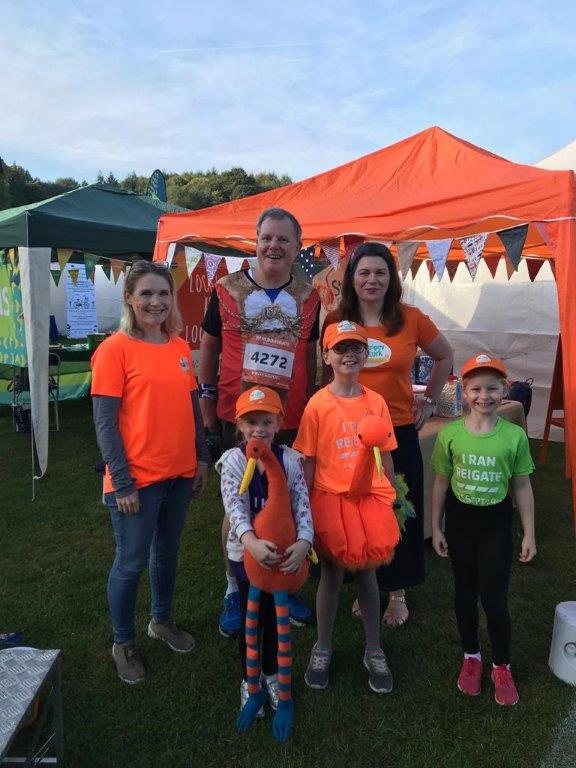 The Lime Tree School teachers were flying our flag, with smiles aplenty. 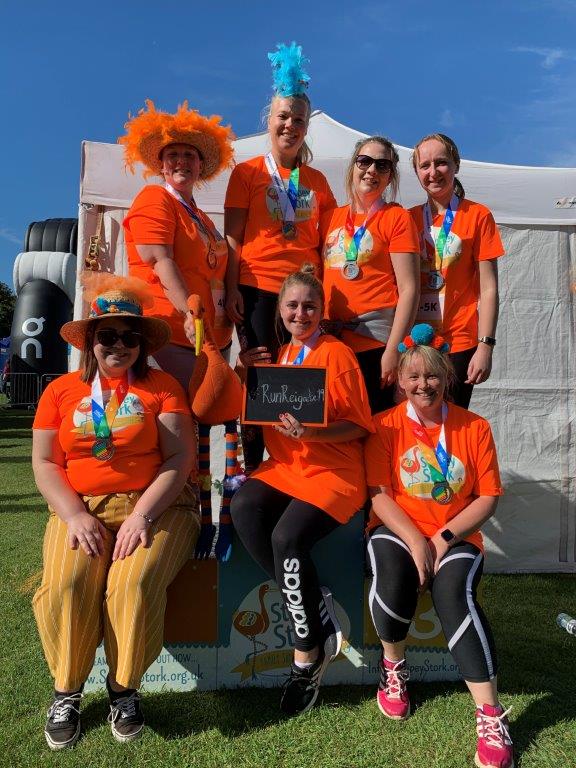 Jon from Celtic Contractors deserves a special mention for being our top fundraiser, his total currently stands at £2363.75 – what a smashing effort! 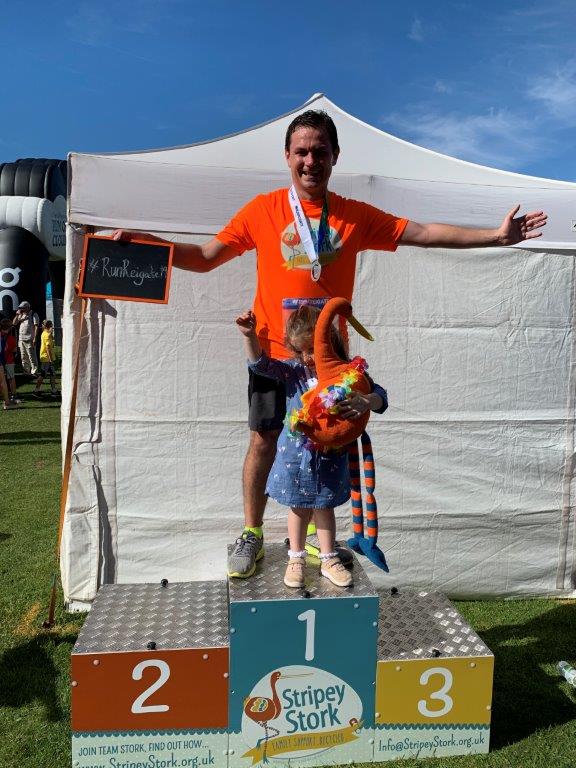 Thanks to the fabulous team at Willis Towers Watson, here they are looking cool and collected. 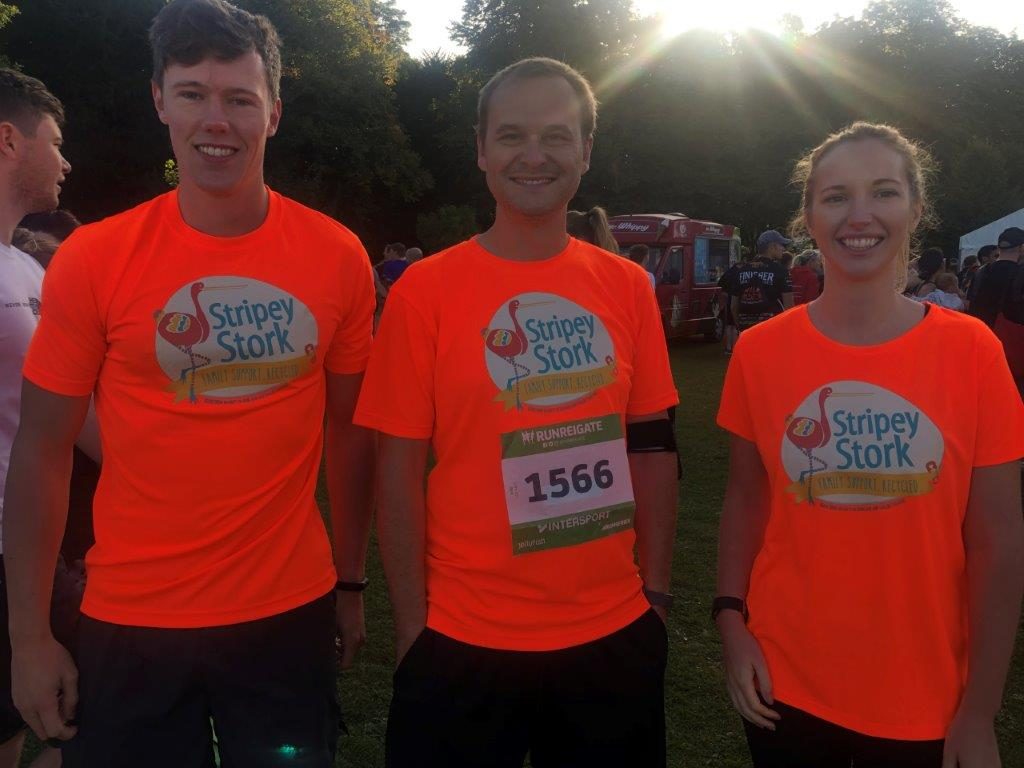 Special thanks to Helen and Esther who splashed the orange much further than Reigate. Unfortunately, they were unable to make the event due to a family bereavement, but how amazing that they still completed the equivalent distance in another county. Their efforts blew us away! 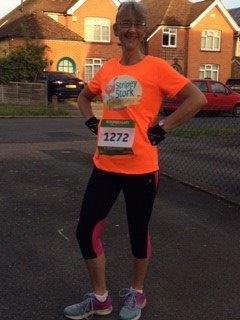 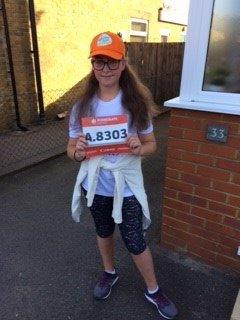 Stripey’s stall – a hive of activity

Situated close to the finish line, we couldn’t be missed as our runners came flooding in and joined us on our stall. It became a meeting point for many, and it was lovely to have the opportunity to say hello to familiar faces and introduce ourselves to some new ones. 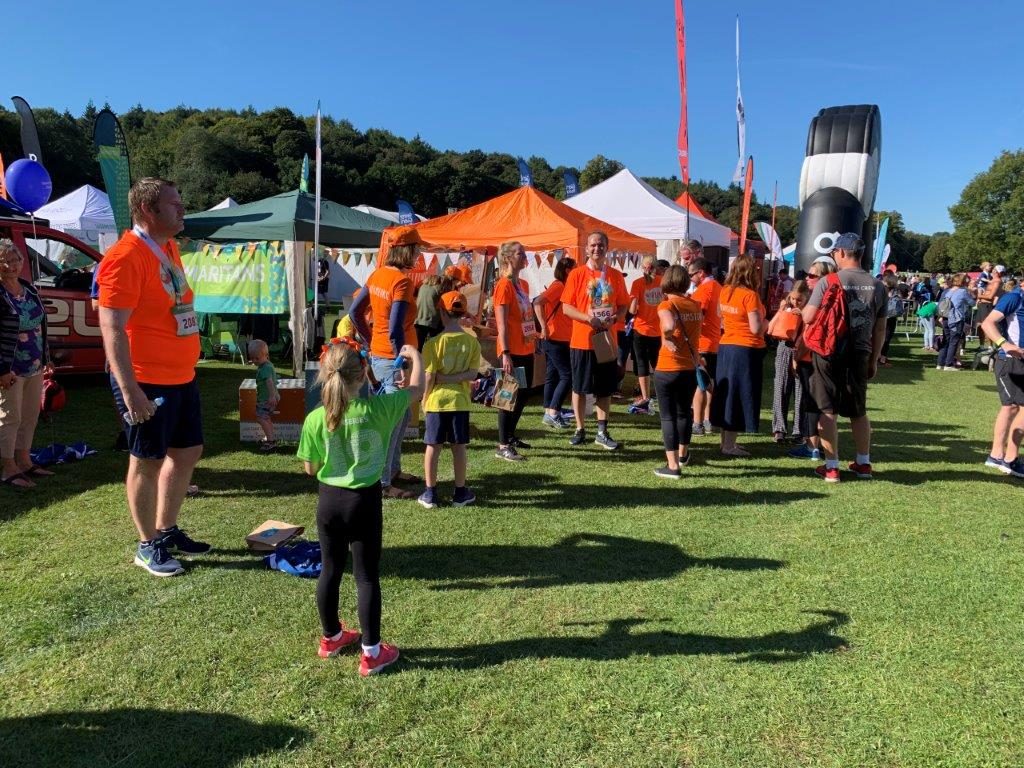 After our runners had caught their breath, we rewarded them with a Stripey Stork certificate and gift bag full of goodies as a gesture of appreciation. 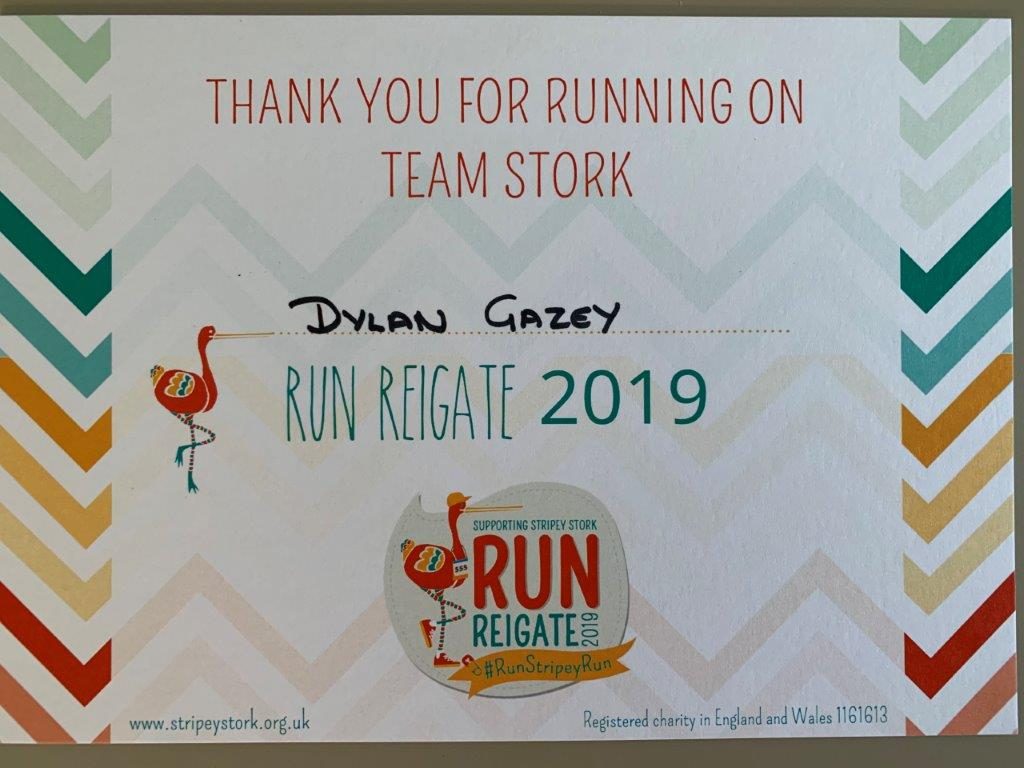 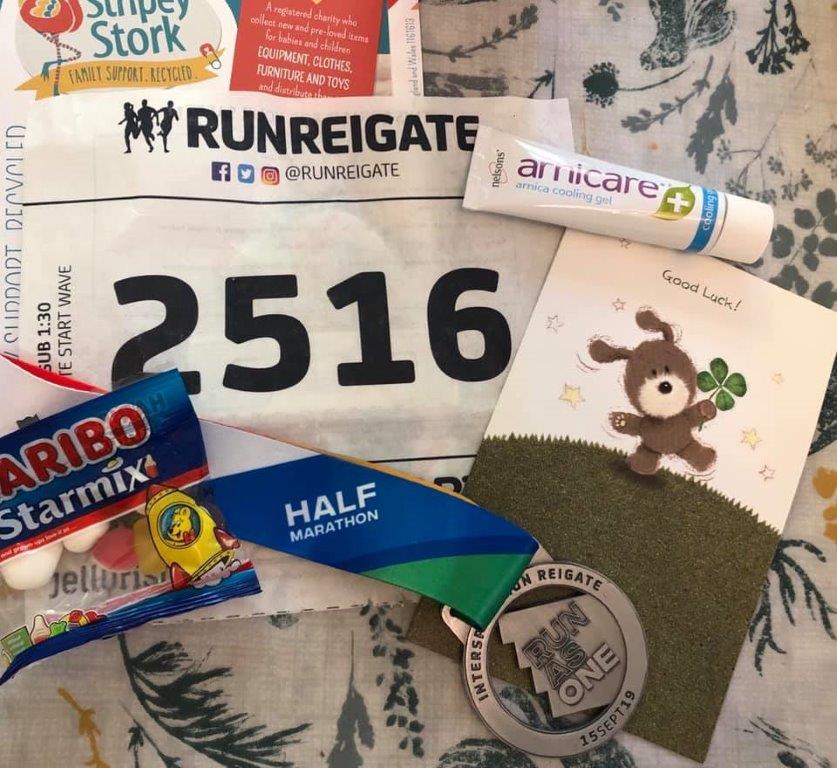 Everyone was a winner on Stripey’s winners’ podium, which made for some fabulous photo opportunities – even Gus the dog couldn’t resist a pose. 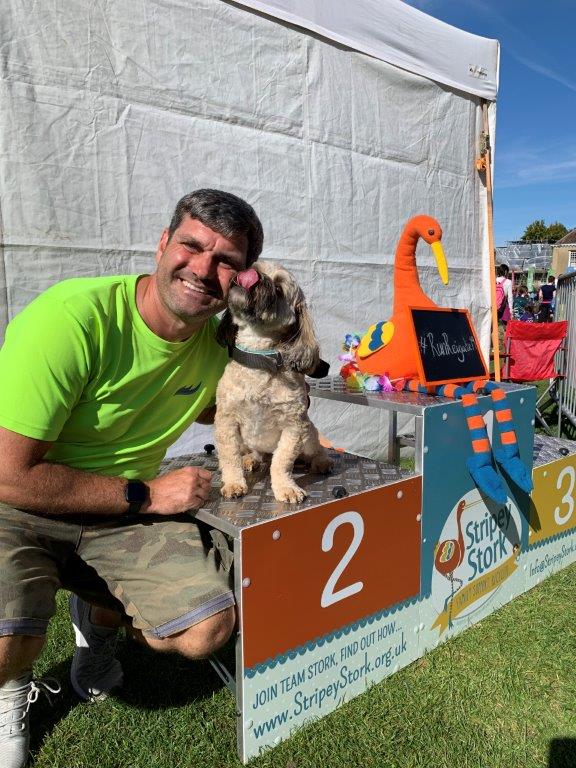 And after all those hugs, the least Stripey could do was reward the children with a sticker and a Stripey face paint. 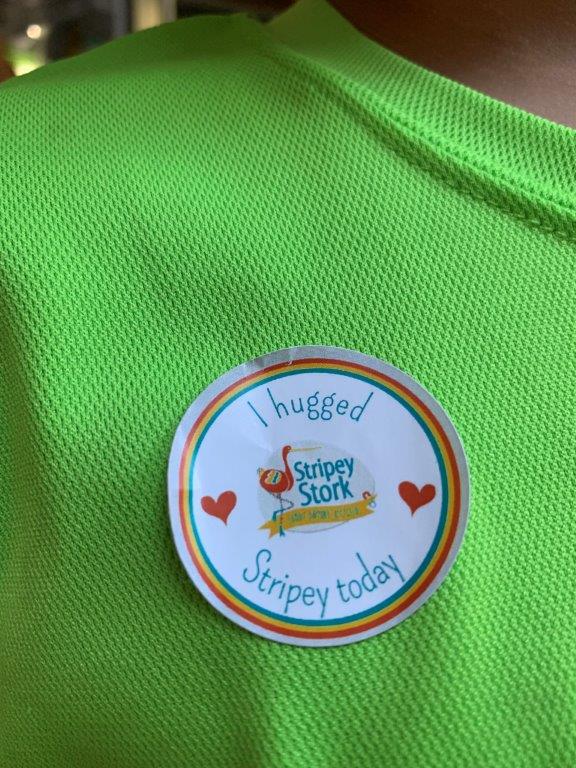 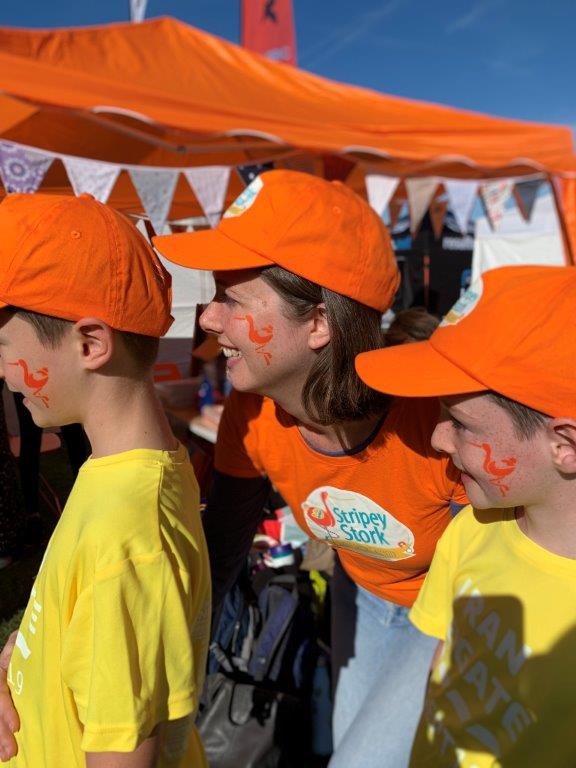 Our powerhouse of volunteers

Last but never least, our lovely and hardworking bunch of volunteers who gave up their time for us, whether that was manning the stall, taking payments at one of our car parks or helping behind the scenes in preparation for, or after, the event. 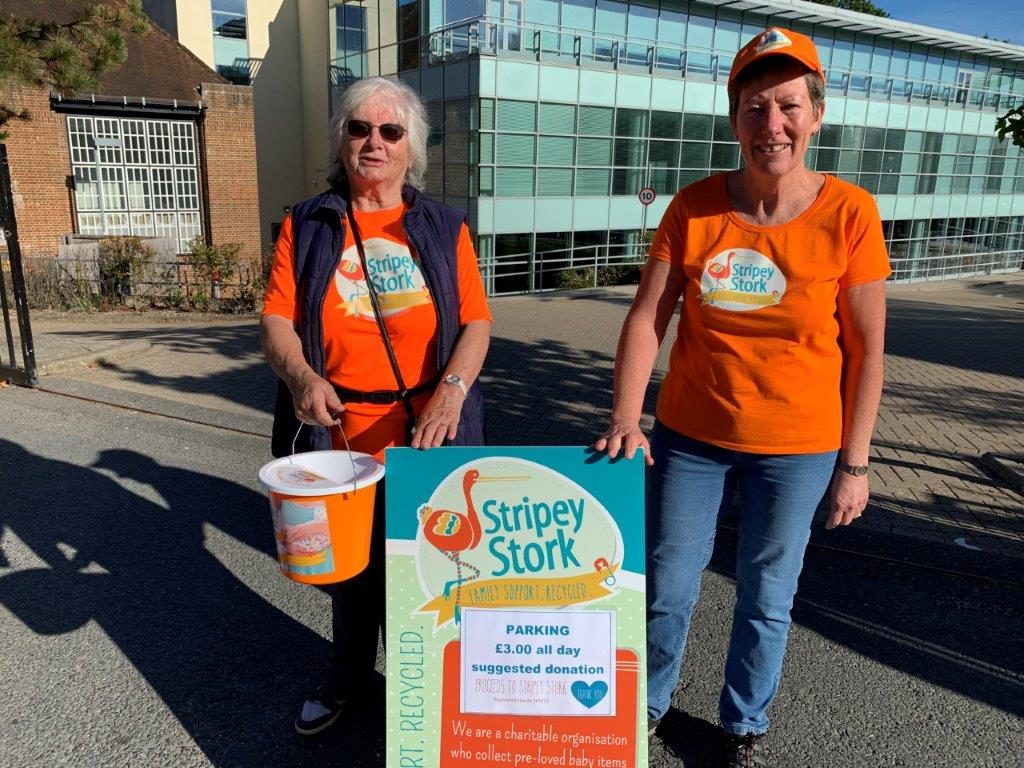 This blog would not be complete without a special mention to a very special person, Donna, our Community Ambassador. She project managed the whole event for Stripey Stork and did an amazing job we’re sure you’ll agree. 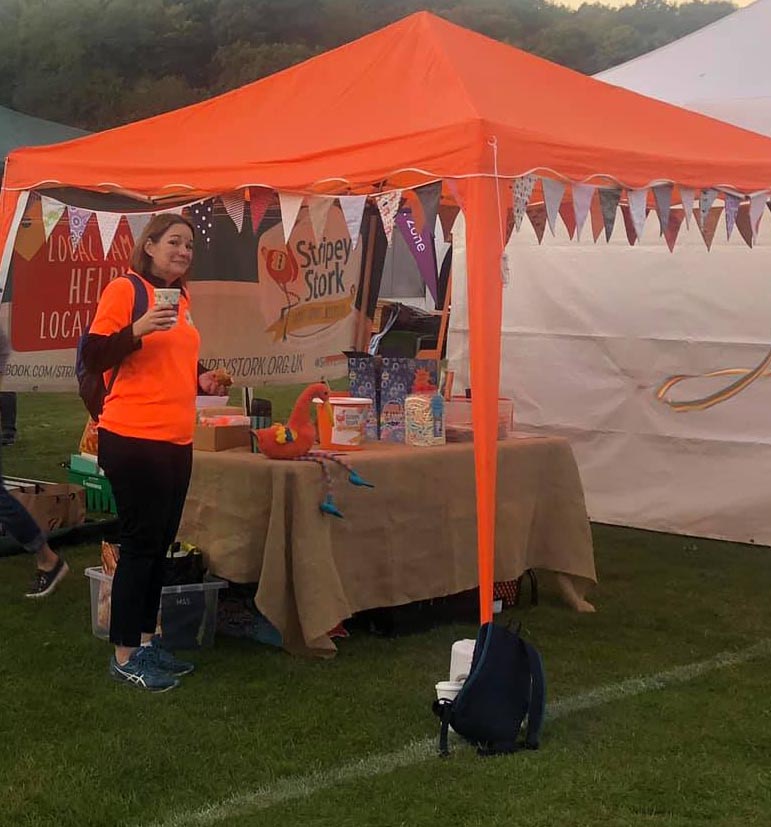 We have tremendous support from local businesses at Stripey Stork, and Run Reigate is no exception. A special thanks goes to:

• Puzzler for the puzzle books and magazines which were used in our runner’s goody bags (both adults and children).
• Nelsons for supplying the healthcare remedies for our adult goody bags, they were very much appreciated in helping to alleviate those post-race pains.
• Morrisons for the complimentary wrist bands for their Rest & Relaxation Zone.
• The team from Reed who helped on one of their corporate volunteering days to pack the goody bags in preparation for race day. Also, for them covering the cost of the race entry and t-shirts for their runners, whilst adding an additional £50 in sponsorship.
• Crumbs Brewery who kindly donated the proceeds from a couple of cases of beer that were sold to our volunteers in the week leading up to the event, with all funds going towards our Run Reigate fund.
• esure who were getting creative with glitter tattoos on their own stall, with all proceeds going towards our Bags4School campaign.

And of course, to the fabulous team at Run Reigate who pulled yet another blinder. Special thanks to Lisa, Karen, Nicola and Dave for working in partnership with us again – we can’t wait for Run Reigate 2020.

We’ll let you catch your breath of course, but if you’re interested in signing up for one of next year’s races you can do so here. Or, send an email to [email protected] to express your interest in joining Team Stork – we’d love to have you on board.