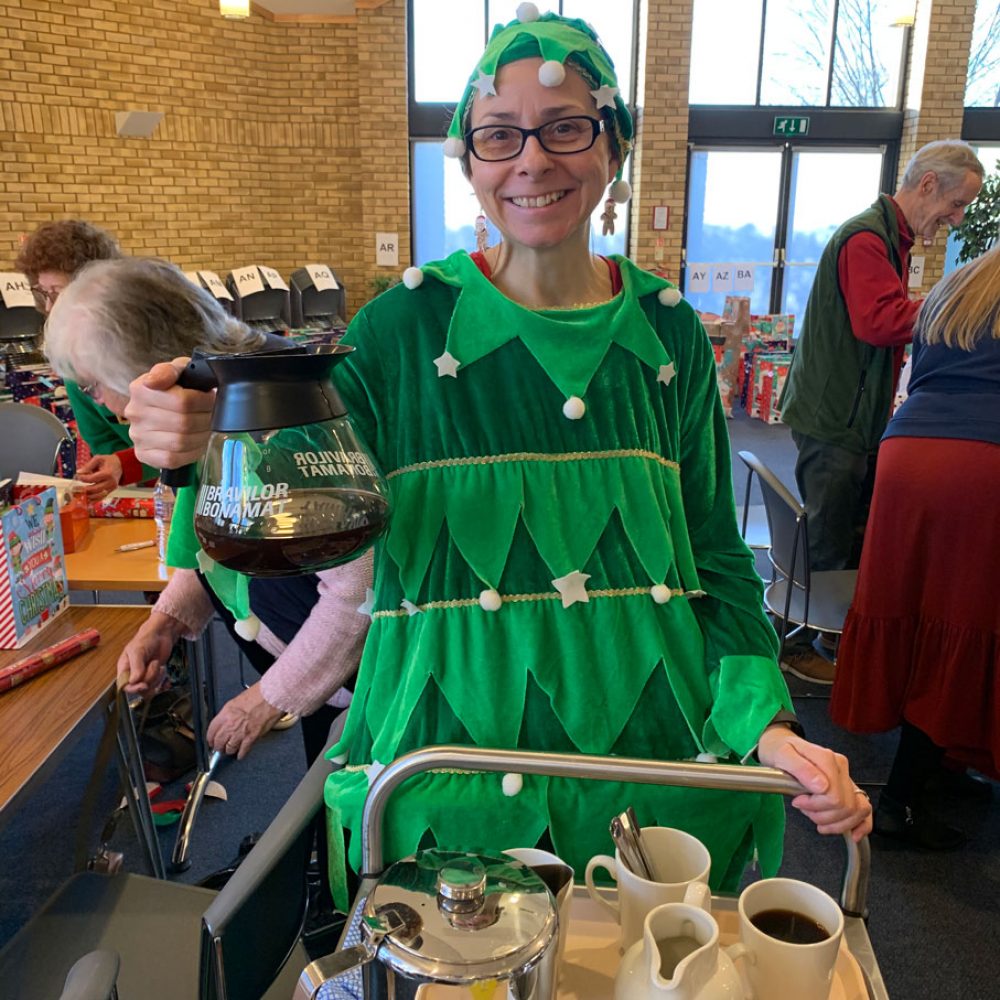 It’s beginning to look a lot like Christmas. At least it was on 9th December, as Reigate Baptist Church was transformed into a festive frenzy of present wrapping, mince pies and unlimited Christmas spirit.

Updated figures (including late referrals):
2276 children and 1047 parents/carers have been distributed gifts through Santa Stork 2019. That’s a grand total of 3323, which is 10% higher than our target and nearly 1000 more presents than last year!

A culmination of all the hard work which goes into Santa Stork is our Giving Day. We wrap all of the presents which have been so generously donated and then hand them over to our referral partners, who deliver them to the families they are supporting in time for Christmas. 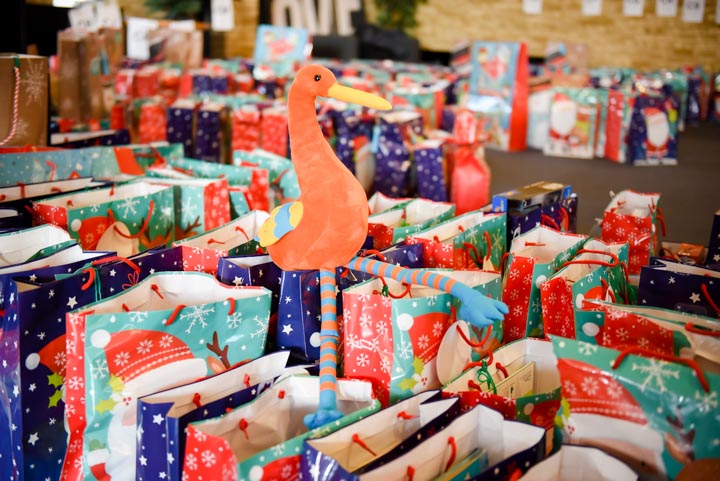 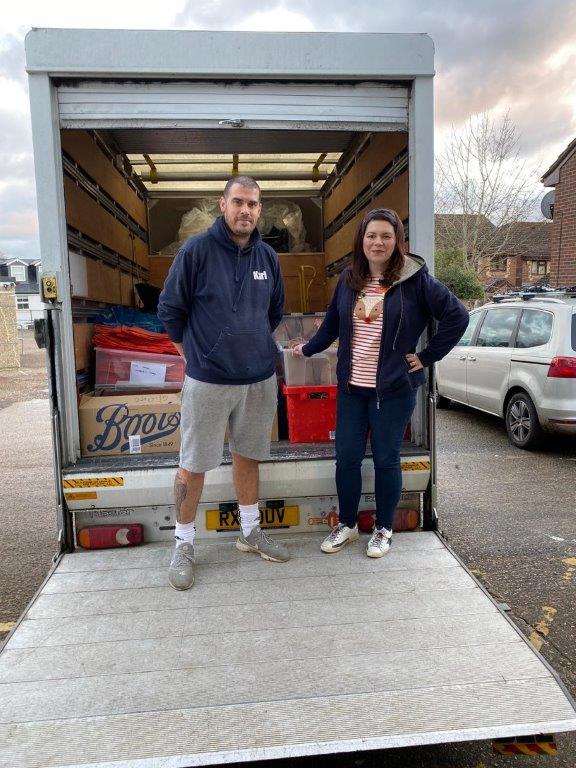 It all started at the crack of dawn when ASD Transport and Karl aka ‘Karl’s Man and Van’, delivered all the presents to Reigate Baptist Church. A team of volunteers where eagerly waiting to unload and sort them into referral bundles. As you can imagine, with nearly 3000 presents, organisation was key! It’s a good job Chief Elf Elaine was calm and in control to coordinate the day.

Wrapping stations were filled with our wonderful volunteers, community groups and corporate teams. Christmas jumpers were the uniform which meant everyone looked the part, some more than others. 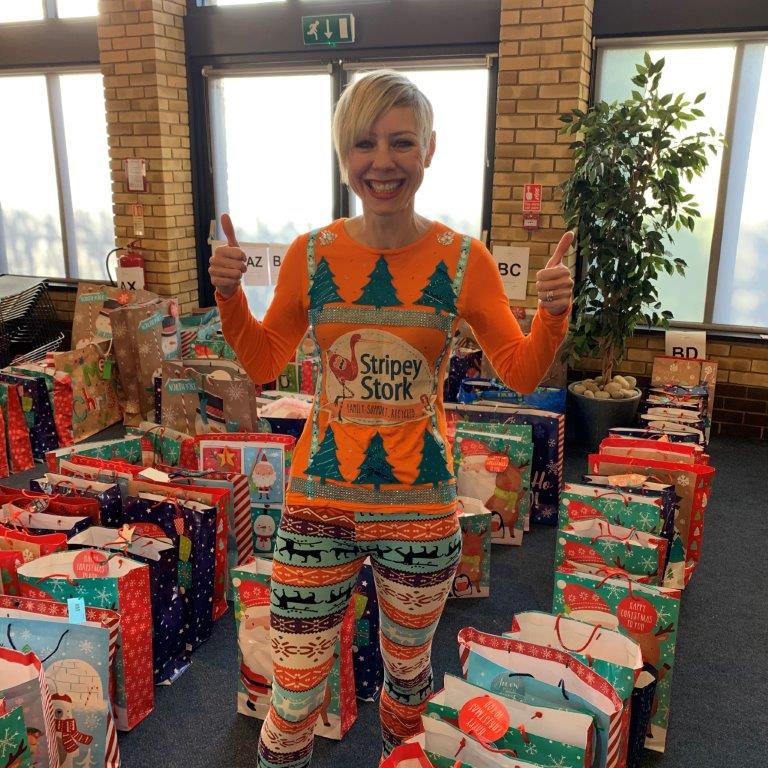 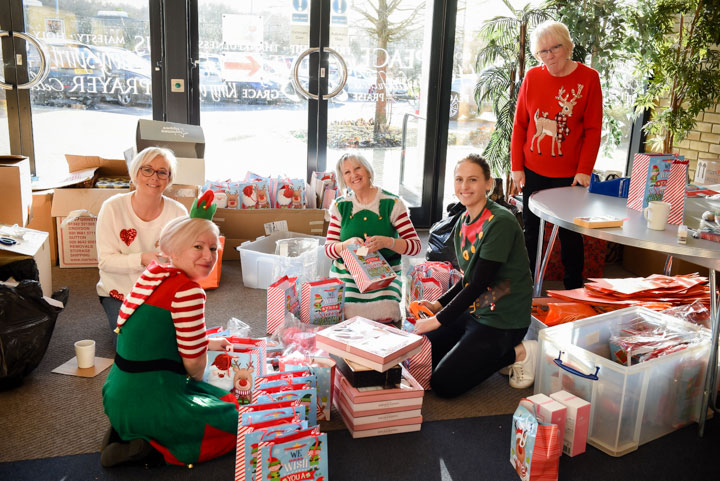 Everyone was eager to start wrapping like they’ve never wrapped before. We are so grateful to everyone who took time out of their busy lives to lend a helping hand. 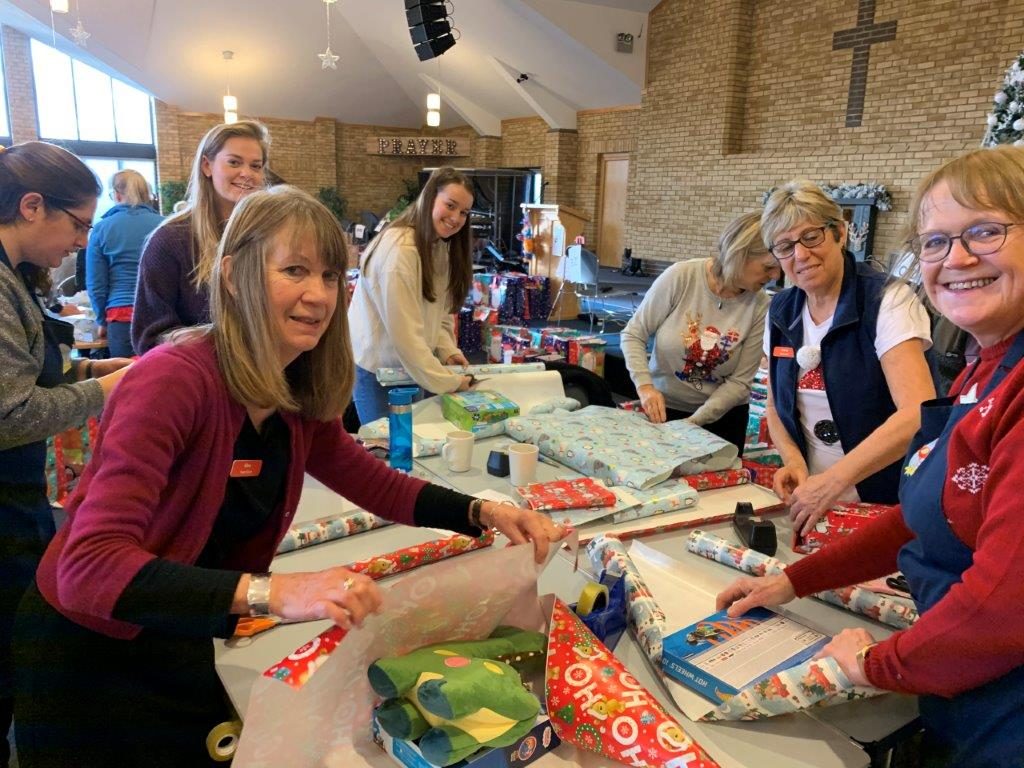 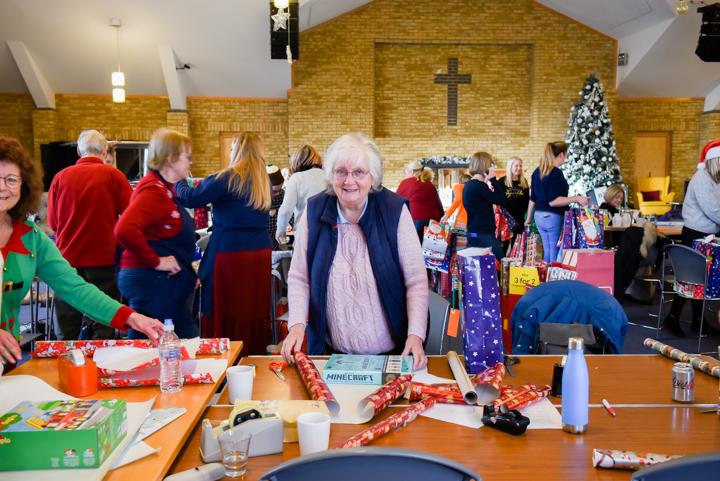 So, what’s included in each gift bundle? Unlike the usual pre-loved donations we accept all year round, Santa Stork gifts are brand new and, wherever possible, are what the children (or the parents/carers on their behalf) have requested through their support worker. As well as the wrapped main present, approximately three stocking fillers are included in each gift bag. 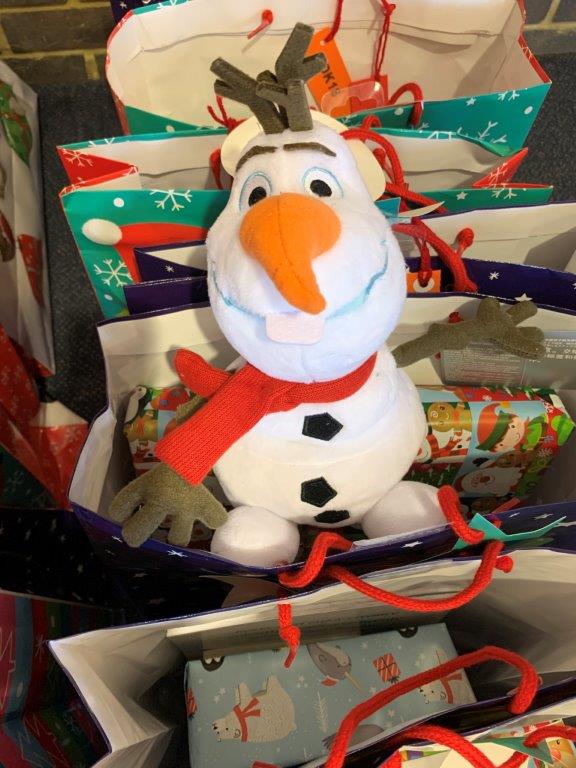 48 Olafs thanks to the In Kind Direct / Disney donation

We are always mindful that no family’s children should be left out, no matter how old. And if it’s felt that the parent/carer would benefit from a present themselves, they are also added to the list. 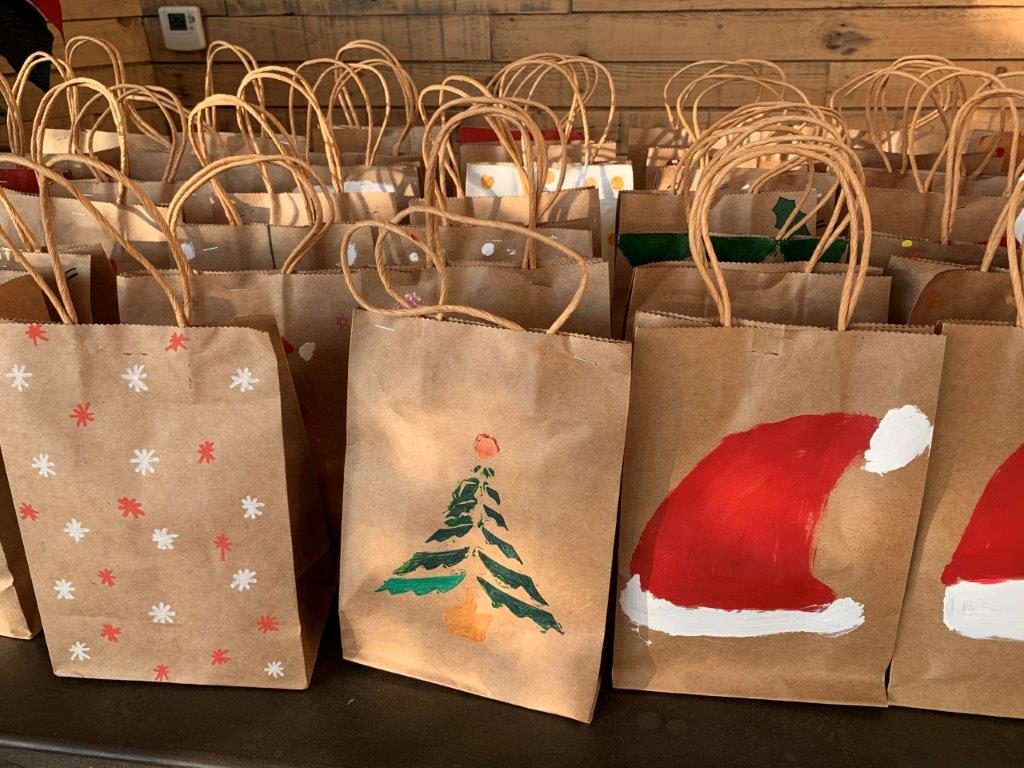 The referrals collecting on behalf of the families were allocated time slots throughout the day. If time was on their side, they were invited to grab a moment and a mince pie in our waiting area. 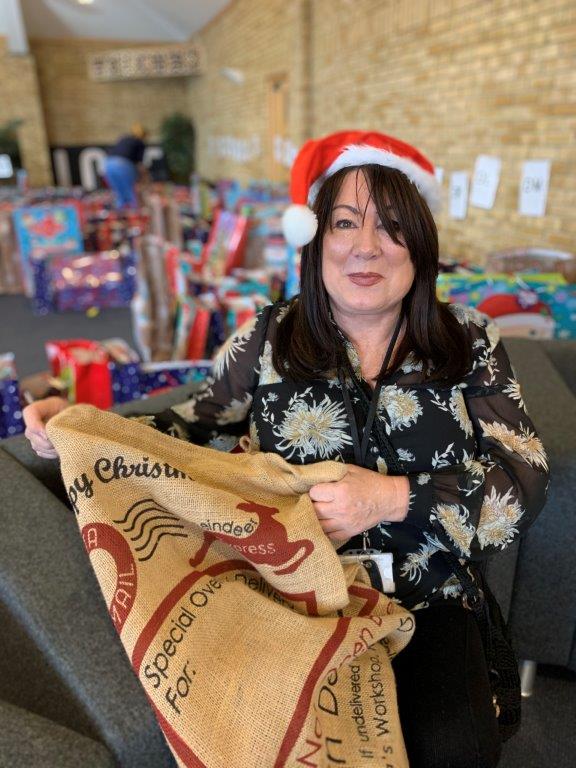 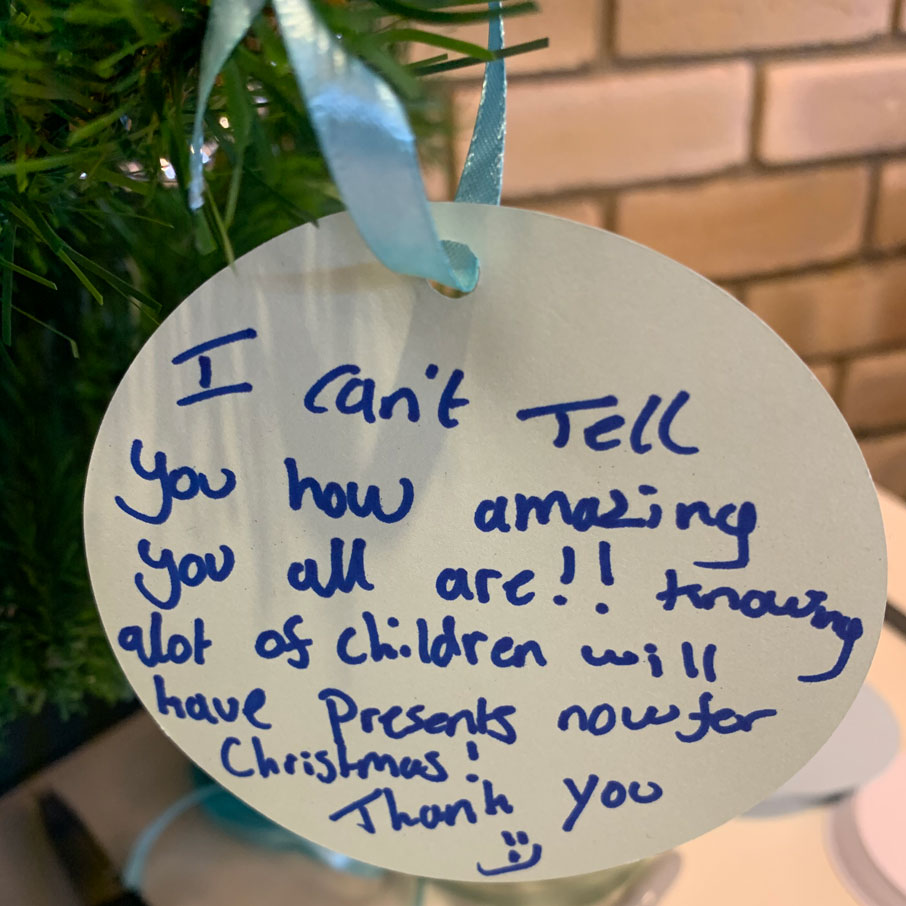 It was humbling for us to chat with so many of them about the families they are supporting. Although we don’t get to see the family’s gratification first hand, they do, and hearing their stories is both heart warming and heart breaking at the same time. 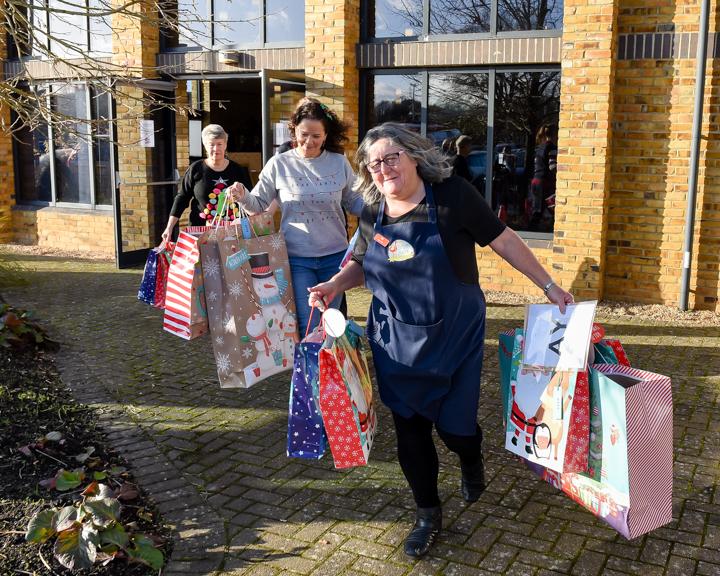 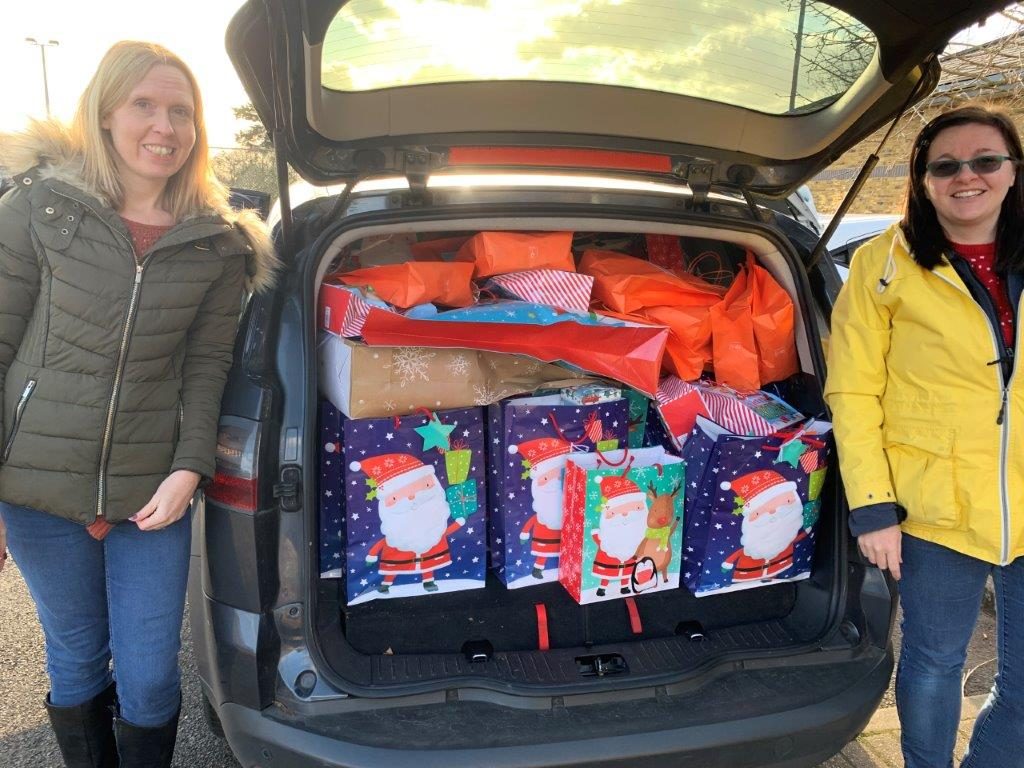 Two special visitors who joined us for the day was the Mayor of Reigate & Banstead, Councillor Keith Foreman, and the Mayoress. As Stripey Stork is one of their supported charities this year, they’ve been involved in Santa Stork from the beginning, so they weren’t going to miss the ultimate Santa Stork experience. 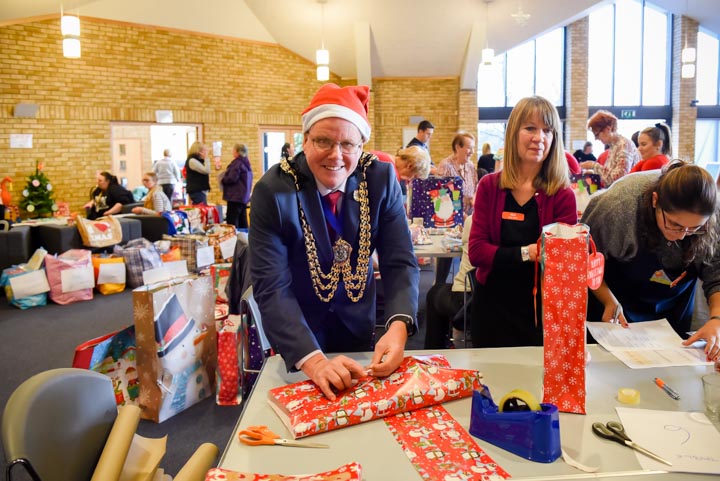 We were delighted to welcome That’s TV Surrey who were keen to see for themselves the scale of this Christmas Giving project and what’s involved.

As interviewed in the feature, one of the most touching stories was hearing from Steph who has been helped by Stripey Stork and Santa Stork in the past. Thankfully her family are in a much better place now, but she’ll never forget how desperate her situation was and how being on the receiving end of such generosity made her feel. She felt compelled to make a contribution of her own, so we were so pleased that she could join us for the day. She was also able to catch up with her support worker from that period, how rewarding for everyone involved. 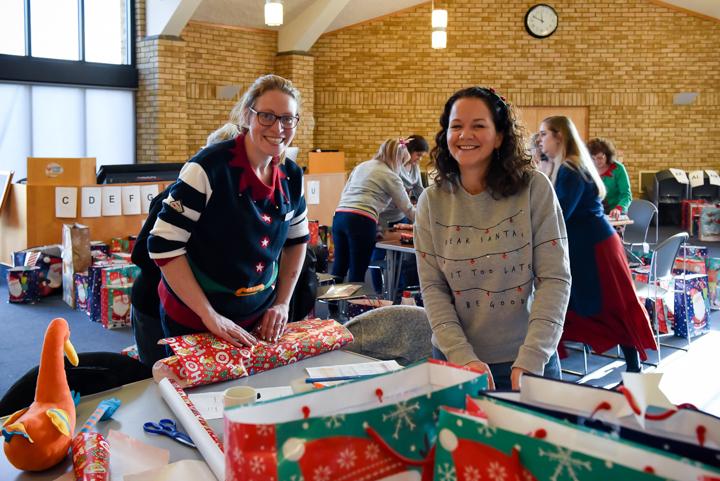 Time flew by and as the day came to a close, everyone was buzzing from the satisfaction of knowing the difference they’d made to so many local families this Christmas. Watching this speeded up video was exhausting, but satisfying to see all that had been achieved in one day.

This was our sixth Santa Stork and we had no doubt that it was going to be our biggest. Sadly, our predictions were correct. We set ourselves a target of distributing 2000 gifts to children and 1000 to their parents/carers. The total figures are:

There’s still more late requests coming in and these are expected right up until we break for Christmas on the 20th December. We’ll be updating this blog with the final figures when the campaign comes to a close.

To demonstrate how the demand for Santa Stork has increased over time, here’s some figures to contemplate:

The scale of Santa Stork is now literally off the scale! An amazing amount of families have been helped this Christmas and that’s been made possible because of the generosity of our local community. They’ve answered our plea, shared our messages and are without doubt the absolute best!

Our message this year was focussed around making Santa Stork part of your family’s Christmas, and our wishes were made true. We saw many familiar faces and heard stories of how children had been asking when they were going to go shopping for “the children who don’t have very much”. It gives us hope for a better, more equal, future, but until then we’ll keep doing what we do, and welcome the day that we are no longer needed.

Organising a campaign of this magnitude is a collective effort, so here are some special thank you’s. We hope we’ve captured everyone, but as you can imagine it’s a long list so if we’ve missed anyone, please let us know.

The following two organisations have been key partners and running the project without them would have been unimaginable. They’ve integrated the additional workload into their regular working day and for this we are extremely grateful:

The following have also been integral in making Santa Stork happen, thanks to:

Thank you to the following for organising their own collections:

It’s been an extremely busy month and we feel very lucky to have had the support of so many people, small businesses and organisations who have been making their own difference in the name of Stripey Stork. We haven’t been able to thank each of these individually on social media, but that just goes to show the extent of the support, so thanks also to: