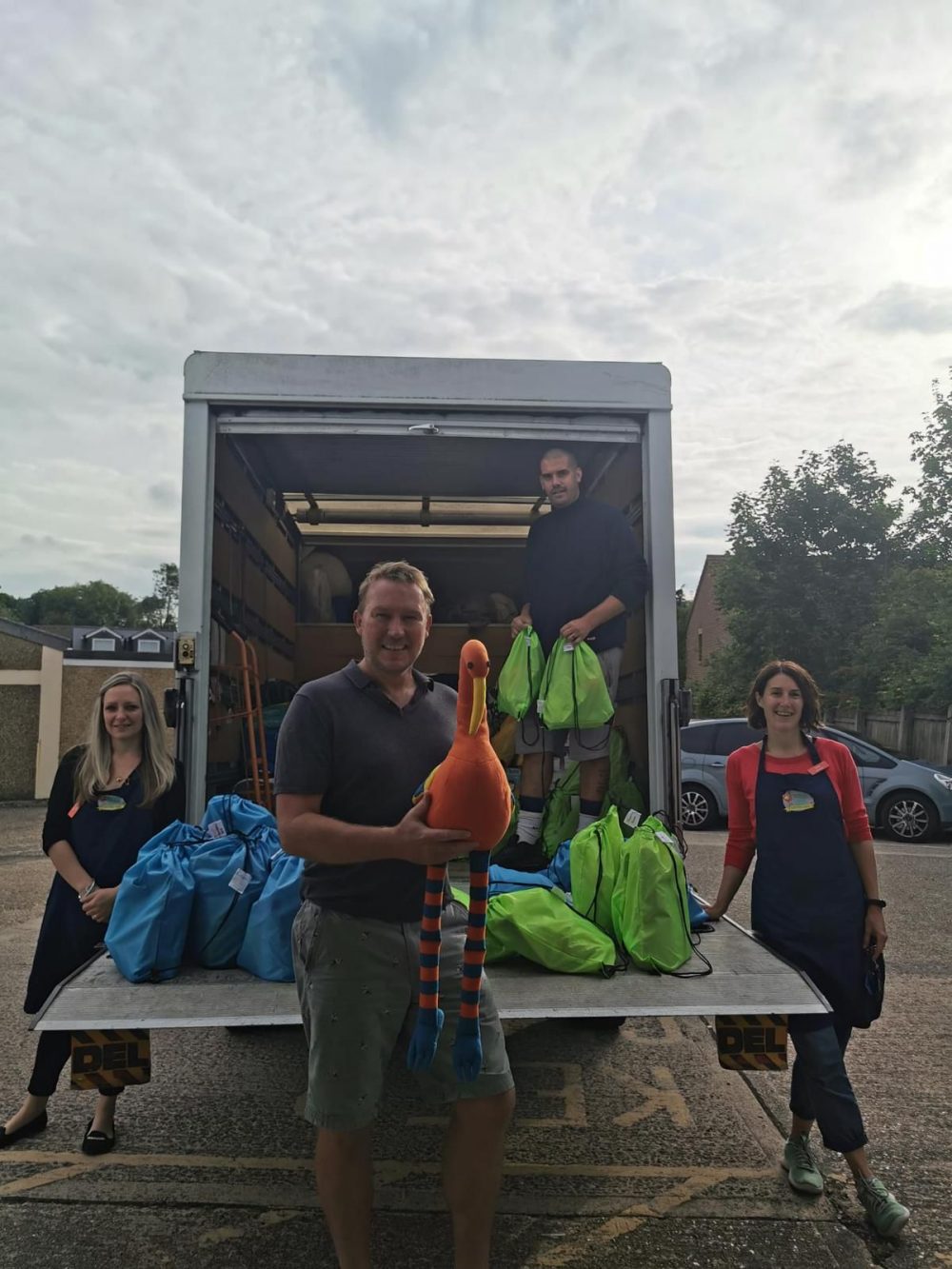 The end of Summer and our return to full operations at HQ came hurtling towards us at great speed.  We had all been watching the news coverage of the situation in Afghanistan and knew that it would only be a matter of time before we received requests for assistance. Stripey Stork wanted to help however we could.

The first urgent appeal for aid for the Afghan children arriving in the UK came from the Red Cross via a fellow baby bank Little Village HQ in London.  The size and specific nature of the request was a challenge, but we knew that with the help of our local community, volunteers, and staff we would be able to fulfil the request. Within 48 hours of the initial request 100 completed packs were safely on their way to London. 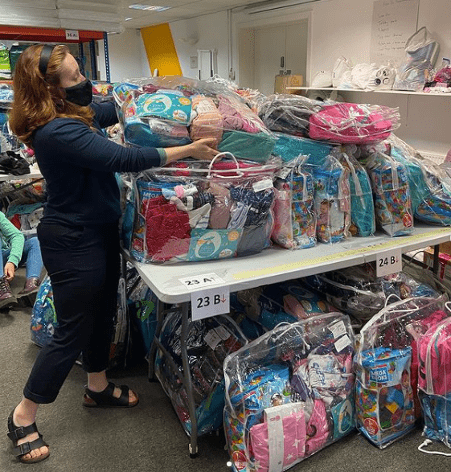 It was fantastic to see the packs being distributed and getting to where they were needed.  It was then that we received an email directly from one of the refugee families that had been given one of our packs (Read Kamila’s Story here).  This filled all our hearts – inspiring for the team to read and it spurred us on as more refugee aid requests came in from the Alliance for Better Care teams supporting families in Gatwick hotels.

#TeamStork and our volunteers worked out of hours and on the weekend to fulfil the order, working together to make sure that the packs and items included everything that was requested plus a lot of love. After the weekend delivery we received this update:

“The team did a delivery to one hotel on Sunday where it was distributed directly by the staff there, and then yesterday did a screening clinic at a second hotel where they were able to take exactly what was needed into each room. I would estimate based on numbers in each hotel that these donations have helped over 200 families with 500 children and babies.” -Katherine Saunders CEO of Alliance for Better Care 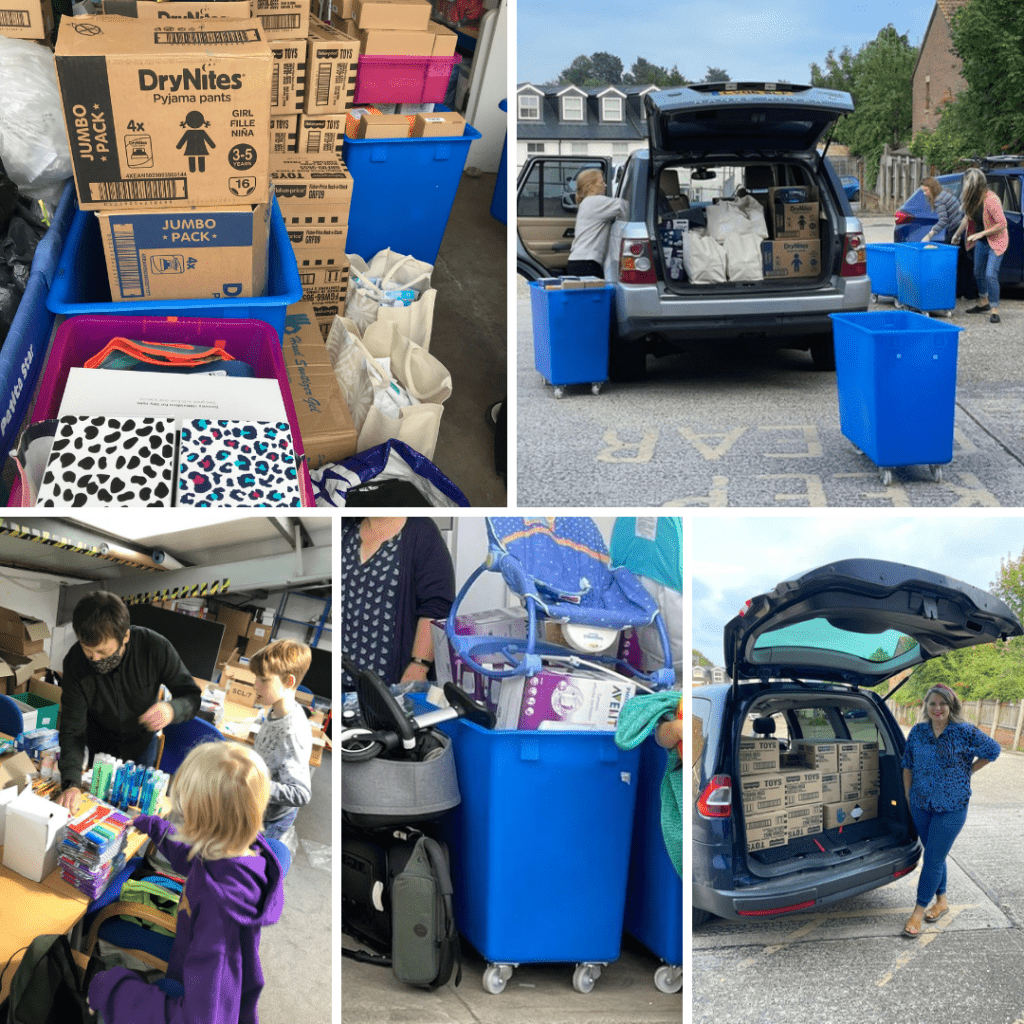 Lena Addu from Alliance for Better Care Ltd has worked with Stripey Stork for many years, and she provided some more insight on how the team were working and how your donations were being distributed:

“The hotels accommodating the newly arrived families all vary, and the health team had to adapt quickly. Some provided rooms for doctors to work from or a communal space that could be screened off. In others we had a system of visiting rooms (observant of quarantine restrictions).

Families with medical problems, pregnant women or under-fives were prioritised, and the health offer also needed to include the well-being of some young (and very bored!) residents.

Families told us that they had left with only the clothes they were wearing – others were more subdued but leaving in a hurry was a familiar story.  Parents asked for warm clothes for their children, shoes, and toiletries.  After a few hotel-room visits, and seeing the stock that Stripey had donated, the doctors started to broaden the usual prescriptions by asking what else was needed as well as items like antibiotics and pain relief. It was so helpful to offer something to occupy young children on the 10th day of being confined to a hotel room with just 15 minutes daily outdoor exercise time.

A distribution system was quickly developed, and every member of the team got on board – notes were exchanged between the teams “medicines to be collected, vitamins to be given …and stacking ring for the baby”. The midwives did the rounds, and every pregnant woman received a maternity bag and toiletries for the family. Being able to give out bags for all ages of children was easy and well received. Lunchboxes “that could be useful school” signalled steps towards routine and settling.  No one knew where they would be moved to next, and some were visibly upset having left family members behind, but this was a chance to make the here and now a little less stressful.  Children, even in difficult circumstances, were full of smiles when toys and bags were handed over – interpreters were on hand to give explanations regarding any equipment. All babies had a steriliser by the time we left.

Because everything was so clearly labelled we were able to quickly reach more families and closely match the need to what was being given. Families didn’t have much in the way of bags, so it was helpful that everything handed out was contained in a bag.

Many thanks to you and all your team and the volunteers. It lifted everyone’s spirits and as always made enormous difference to the people we were there to respond to.” 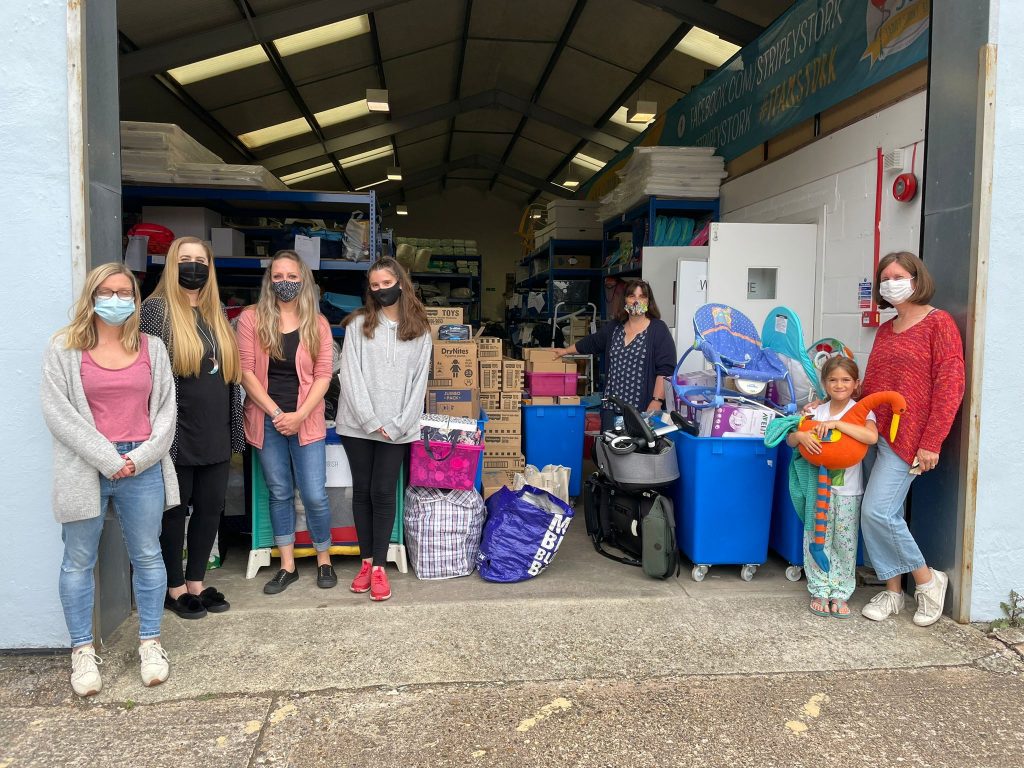 This took the total of children helped to 600 but then a request for a further 76 children in a Kingston hotel was sent by First Community Health and Care. Once again, the team mobilised and a van load of items containing clothes, toiletries and toys for every child was sent as well as a supply of sterilisers, nappies and equipment for the health teams to distribute as needed.

Our generous supporter Russell Brett from Matthew Douglas Ltd has donated the next £1,300 from his running pledge to support this work.  He came to the warehouse and helped load up the van with #StripeyStork supplies going out to the quarantine hotel. On receipt of this delivery, we were told how one of the packs went to a mother that gave birth in Kabul Airport who had nothing for the baby or for herself.  When she received one of our newborn packs and baby equipment, she broke down with tears of joy. We can’t begin to imagine what she has been though and are humbled that we can help. 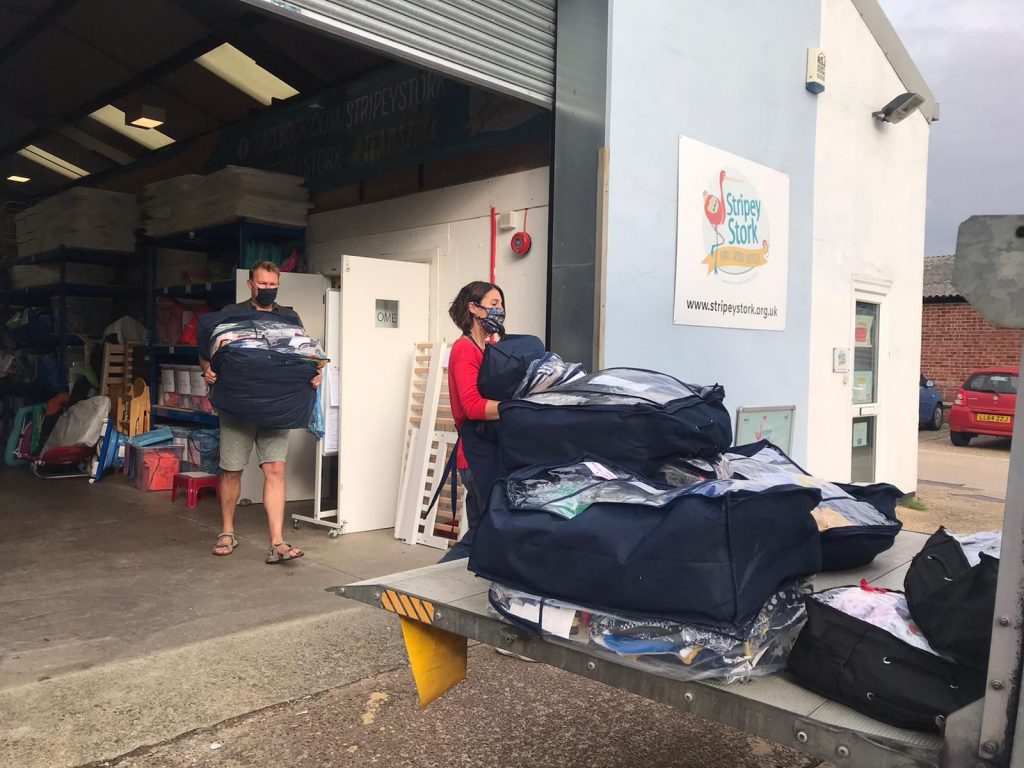 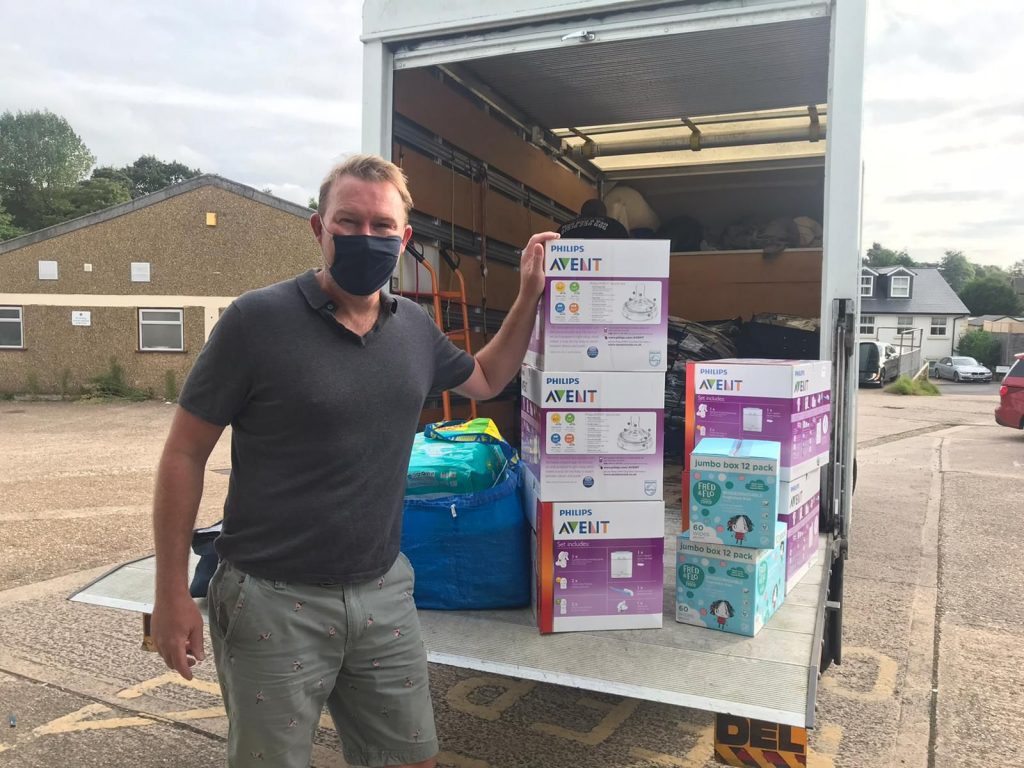 We are grateful to everyone who has contributed to support our work via CAF. It has enabled us to add in new items and keep the warehouse stock levels up. You can continue to help us here: https://bit.ly/3zOYE0E …

As one of our friends commented on a recent LinkedIn post:

“We all need to feel welcomed and loved, but after such an experience never more… welcome to the new arrivals.”

Thank you, your support really is making a huge difference. #TeamStork

Read More
PrevPreviousRun Reigate 2021 – back as one!
NextChristmas giving with Choice, Dignity and CareNext